Biology Alumna and Autism Advocate Shares Stories with the World 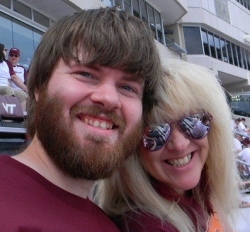 Liz Becker and her son Matt tell their stories to help others with autism.

Liz Becker, who earned her Bachelor of Science degree in biology in 1998 and her Master of Science in education in 2000 from Radford University, is known for her stories.  She is asked by autism advocacy groups every year to tell her story about her son Matt, who was diagnosed with autism in 1988.

“The diagnosis of autism was a rare one back in 1988 - only 1 in 10,000 was affected.  Then the numbers grew … and people began to notice,” says Becker.  She went from trying to explain autism to those Matt met each year, to really promoting autism awareness through her stories, speaking engagements and her  blog. “We officially reached 2.5 million people on Sunday, September 30, 2012,” she says.  The blog visitors come from more than 70 countries around the world. Recently, she was interviewed by “Autism-Live” and “Everyday Autism Miracles” – resources for parents of children with autism.

When Matt was diagnosed with moderate / severe autism, Becker knew of no other parent with a child with autism.  “Raising a child with autism is a very different experience and without help, resources, or someone to bounce ideas off of only made it harder,” says Becker.  At the time, doctors advised Becker to "put Matt in a home" because he would be too much of a burden on me and my family.  “Instead of institutionalizing Matt, we took him back to our home where he progressed in tiny steps every year. Now this well-educated, talented young man shows just how ill-informed the medical community was about autism. Matt has overcome almost every one of the classically autistic behaviors and is an inspiration to those in the early years of autism,” says Becker.

While earning her biology degree, Becker was still able to be with Matt most of the time, work with his teachers and aides and could stay on top of his progress.  “I have great memories of RU – it’s a wonderful school and I was able to really excel in my field under the guidance of Fred Singer.  I worked with him on spider communication research,” says Becker.  Her research with Singer was published.  “The research made me think, boosted my self-esteem and got me focused on a whole different future,” she adds.

Becker was accepted with a full stipend to the Neurobiology and Anatomy Doctoral program at Wake Forest.  “I thought my path was set – but it was not,” says Becker.  “The work was interesting and I loved it – but I did not have any extra time for my kids – especially Matt.  Matt was going through puberty and the change in hormones was putting him through some very difficult times,” she says, “I chose to put him first, and his successes make it clear to me that it was the right decision.”

She then completed her master’s degree in education so that she could work in the schools to be on the same schedule as Matt.  “Matt was able to not only graduate, but graduate with honors, number four in his graduating class and as a member of the National Honor Society.  He could not have done that had I not had the time to help him overcome the tremendous amount of obstacles laid before him,” she says.

She is passionate about sharing stories of Matt’s struggles along the way and her own education of autism with other parents to offer hope and inspiration.  In addition to national interviews, speaking engagements and her international blog, she is currently writing a book for parents and professionals entitled “Autism and the basics of non-verbal communication.”  She is also a full time biology faculty member at Wytheville Community College and is an adjunct biology instructor at RU.
To learn more about Becker and her son’s journey with autism, read her stories.