Applied mathematics major Alex McMillian is halfway through his first semester in college, but he is classified as a sophomore.  And that’s no surprise to his faculty mentor and mathematics professor Wei-Chi Yang.  The Carroll County High School graduate is known for his eagerness for more challenging work. “He is far ahead of other classmates.  When I slow down my pace, I will ask him to do some harder problems,” says Yang who teaches McMillian’s Math 430 Advanced Calculus class.

This semester, Yang took notice of McMillian's gift for mathematics and his dedication to his studies.  "Math 430 is pretty abstract.  Most students still live in calculus, ‘plug and chug’ answers, but Math 430 requires students to complete thorough proofs.  So I spend time motivating my students about why we need such definition and how it is linked to what they have learned in a calculus course.  Alex can almost bypass the 'motivation' stage and go right into the definition and theory, which is amazing," says Yang.

McMillian is now working with Yang on a research project to make the proof of Fundamental Theorem of Calculus (FTC) more accessible to students, and extend the proof to three dimensional.  “The FTC is linked to Green’s, Divergence and Stokes’ Theorems, which have great applications in many applied sciences and engineering,” adds Yang.

Mathematics faculty member and McMillian’s advisor John McGee will also be conducting a project with him next semester.  McMillian says that he is excited about all of the research opportunities available to him at Radford.  These opportunities will give him the challenges he craves and offer him a chance to network with other mathematicians who are fascinated with math and its role in our lives.

RU Museum of the Earth Sciences Hosts Earthquakes in Virginia: Past, Present and Future

The Museum of the Earth Sciences will host College of William and Mary geology chair and professor Chuck Bailey on Tuesday, Oct. 30 at 7 p.m. in the McGuffey 203.  Dr. Bailey will discuss Virginia's ancient and active faults.

Bailey's research interests are focused on elucidating the tectonic history of the central and southern Appalachians. Although the Appalachians have been studied for well over two centuries, many important tectonic questions remain unanswered. His studies in the Blue Ridge and Piedmont provinces are wide-ranging and integrate structural analysis with petrology, sedimentology, and geochronology.

For more information about the RU Museum of the Earth Sciences Lecture Series, visit the museum's website. 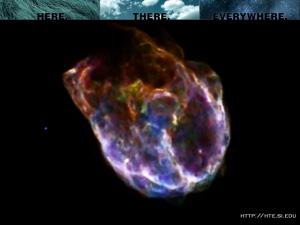 Physics professor Rhett Herman is making room for a NASA exhibit in Reed and Curie Hall called "Here, There, and Everywhere" that illustrates how familiar phenomena on Earth and across the Universe are connected by basic physical laws.

The main feature behind this project, known by the acronym HTE, is a series of spectacular visual comparisons that span from the human scale on Earth to some of the largest structures in the cosmos.  The panels in each of the exhibit topics give examples, with explanatory text, of the same physical process occurring on vastly different scales.

The College of Science and Technology's Alumni Advisory Council met on Oct. 5 from 10 a.m. to 2 p.m. to discuss college updates, construction of the Center for the Sciences and college support.

College department chairs and representatives discussed the opportunities that will be available and the excitement for the Center for the Sciences, a 115,000 square foot science building currently under construction beside Curie Hall along Main Street. 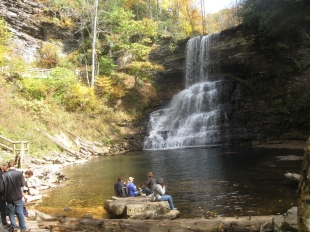 The CSAT STEM Club took a Sunday hike up to the Cascades waterfall in Pembroke, Va.

On Thursday, October 18, Dr. Kimberly T. Lane will be speaking during our normal club meeting time at 7 p.m. in Reed Hall, room 201. She will be talking about her research on Mutational and Thermodynamic Characterization of Bacterial β-Glucuronidase. Please come out to learn about  Dr. Lane's research and show your support for our first faculty guest speaker talk for the semester.

On October 20, the CSAT STEM Club will be going to the Sinkland Farms Pumpkin Patch. We will be leaving around noon, and a sign-up sheet is available for anyone who would like to attend.

The CSAT STEM Club will be volunteering for RU SCARED in Moffett Lawn on Sunday, October 28. We will be handing out candy to children who answer science, math and technology questions on the trivia board. We will also offer face painting during the event.

The CSAT STEM Club will be going to the Museum of Earth Sciences in Reed Hall during our normal meeting time on November 8.

To continue with the geology theme, the club will be going to Dixie Caverns on November 10.

Our last meeting before Thanksgiving Break will be on Thursday, November 15. We will play board games in the Stuart Hall Lounge during our normal meeting time, rather than having a regular meeting.