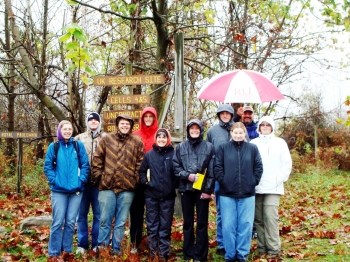 The faculty's goal was to explain and let the students experience the "Appalachian Regional Reforestation Initiative" (ARRI), the collaborative effort by researchers, government regulatory agencies, local communities and mining companies to restore forests on the more than one million acres of former mined land in the Appalachian coal field region. 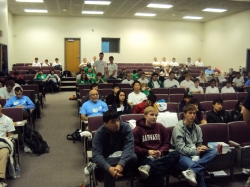 Radford University hosted 27 teams from seven universities and colleges at its site of the ACM Mid-Atlantic Regional Programming Competition.

At RU, 27 teams from seven universities including Virginia Tech, University of Virginia, James Madison University, West Virginia Tech, Longwood University, Bridgewater College and Radford University tried to quickly and creatively apply their programming skills to solve complex, real-world problem sets with only one computer per three person team.  According to ACM, "tackling these problems is equivalent to a semester's worth of programming in a grueling five-hour period." 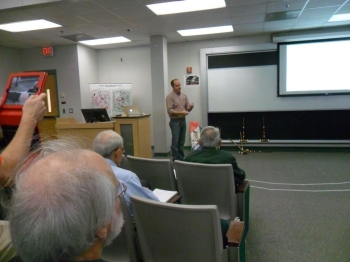 During the meeting, physics faculty member Brett Taylor won best talk from a four-year university with his discussion about using video analysis to teach centripetal acceleration.

The College of Science and Technology's physics department hosted the Chesapeake section of the American Association of Physics Teachers on Saturday, Nov. 10 on campus.

Close to 25 attendees from across Virginia and North Carolina enjoyed presentations on topics such as the "Drag Coefficient of Pumpkins" by Tim Knudson of Southern Virginia University, and "Physics on Steroids -- how to give your physics class a shot in the arm" by Aaron Titus of High Point University.

The attendees voted on the best talks of the meeting.  The winners were:

Anthropological sciences adjunct faculty member and Mayan archaeology expert David S. Anderson spoke to RU students, faculty and friends about the misperceptions of the creation of many monumental feats of humankind.  On Wednesday, November 14, Anderson presented a free public lecture titled, "Ancient Aliens vs. Human Ancestors: The Batlle for the Public Perception of Archaeology."

In his presentation he said that many people believe that virtually every monumental feat of the ancient past, whether it is the construction of the Pyramids of Giza or the development of the Mayan calendar, cannot be explained by the efforts of human ingenuity.  Anderson discussed why people find "this narrative so convincing in spite of decades of archaeological research proving the contrary, and what we can do to guard ourselves against similar deceptions." 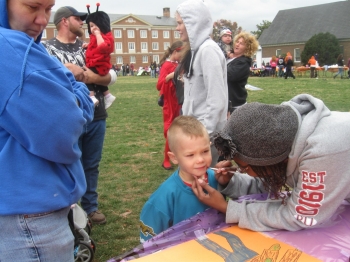 The CSAT STEM Club participated in RU Scared on Sunday, October 28 in Moffett Lawn by providing face painting and a science trivia board with candy for children.

The club visited Dixie Caverns on Saturday, November 10, and on Tuesday, November 13, the CSAT STEM Club hosted a Bonnie Game Night from 7-9 p.m.

Thursday, November 15, the club will host a board game night in Stuart Hall lounge at 7 p.m. for its last meeting before Thanksgiving break.

On November 29, Dr. Beth McClellan will be our second faculty guest speaker for the year during our normal meeting time. The club will hang flyers across campus to raise awareness of the guest lecture.

The CSAT STEM Club will be participating in Winter Wonderland in Peters Hall on Sunday, December 2. The club will sponsor a child by buying Christmas gifts and playing STEM related games with the child.

We hope you have a wonderful Thanksgiving break!