During the college ceremony, the Dean's Scholars will be named and honored.  Faculty select these students based on their outstanding achievements in the sciences, mathematics and technology.

Learn more about the students who have earned this prestigious honor. 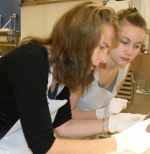 Through an internship with the Radford University Forensic Science Institute, senior anthropological sciences major Michelle "Chelley" Whitman, under the direction of her faculty mentor Donna Boyd, is using her forensic knowledge to serve by examining unidentified human remains provided by the Virginia Office of the Chief Medical Examiner -- in hopes of gathering important information to solve cold criminal cases.

"According to the National Institute of Justice, there are over 40,000 sets of unidentified human remains curated in medical examiner's offices and other laboratories throughout the United States," says Whitman. "This translates to thousands of families wondering about the fate of their missing loved ones -- whether they are still alive and will someday walk through their front door or instead will remain forever lost and nameless,"  Whitman says.

She recently won a $600 scholarship for her essay "Creating a Bridge Between the Forensic Sciences and Families" which discusses how she expects her RU education to facilitate her growth as a scholar-citizen.

She says, "I am being trained to be the ultimate scholar-citizen by helping to identify the lost and nameless, bringing closure to their families, and allowing their bones to tell the story of their fate.  I am honored to be a part of this healing process."

To learn more about Whitman's experience as a scholar-citizen, read her award winning essay. 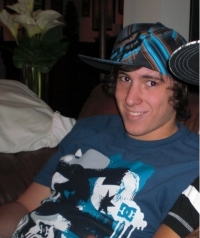 Junior computer science major Garrison Vaughan will be putting his web development and database development knowledge to use this summer at the NASA Goddard Space Flight Center in Greenbelt, Md., as a Junior IT Specialist.

"I'm very excited to work for an organization that has done so much for modern society.  Ever since I was a kid, I've always been impressed with the amazing things NASA has done.  So being able to be an intern there is very exciting for me," says Vaughn.

During the summer, the Manassas, Va., native will be living with his parents and commuting to Greenbelt to assist in supporting NASA's High Performance Computing (HPC) systems. "Basically, I'll be doing anything from web development to Linux and database development," says Vaughn.

During his time at Radford, Vaughn has been a member of the College of Science and Technology website development team under the direction of faculty mentor Jack Davis.  And during his winter break, he created  a website for ITCoalition in Alexandria, Va. This project led to the opportunity at NASA.

"The vice president of that company knows a few people at NASA Goddard and asked if I was interested in the internship that they had available," says Vaughn.  He says he really enjoys web development, but during this internship he wants to expand his knowledge to different types of programming.  "I can't really imagine anything career related that would be more exciting than the possibility to work with a super computer in the future," he says. 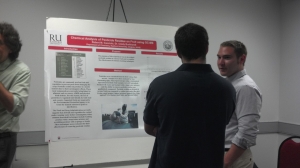 During the evening of Wednesday, April 19, 20 chemistry students presented their research with faculty mentors during the undergraduate research forum on campus.  "It was an excellent night with all of our faculty in attendance and having students presenting their projects," says chemistry program coordinator Joe Wirgau.

Chemistry student Robert Cacciola presented his research about identifying pesticides in fruit skins that he completed under the direction of his faculty mentor Cindy Burkhardt.  "I felt fully prepared to present my work because I was personally involved in every part of the research.  My research has given me a sense of pride in completing my own research goals and has given me invaluable experience in working with instrumentation, which is highly recommended by employers," says Cacciola.

The three-day 21st Annual Undergraduate Graduate Student Engagement Forum included 86 presentations by students in the College of Science and Technology.  "The number of presentations by our students during the forum exemplifies the dedication and mentorship of our outstanding faculty and the diligence of our students.  I'm very proud of all of the research being done every day in our college," says College of Science and Technology Dean Orion Rogers. 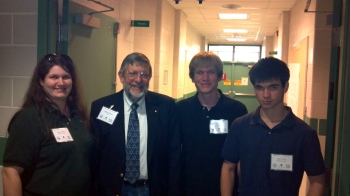 Sylvia Phillips, Alec Frazier and Matt Trayer are pictured with Nobel Laureate William Phillips of the National Institute of Standards and Technology.

Frazier presented "Explanation of the OhmMapper and its use for geo-arctic research in Barrow, Alaska."  Phillips gave a talk titled "Electrical resistivity of the arctic sea ice."

The highlight of the trip was an opportunity to meet 1997 Nobel Laureate William Phillips of the National Institute of Standards and Technology. 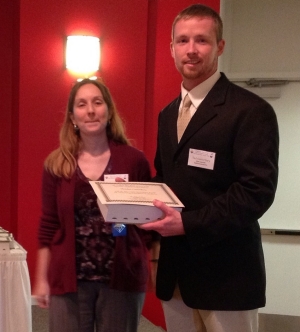 For the past 20 years, RU has been the host of the Virginia Blue Ridge Section of the American Chemical Society meeting thanks to the dedication of chemistry professor Christine Hermann.  The meeting honors the work of outstanding high school and college chemistry students from across the region.

During the meeting, RU senior chemistry student Ted Canterbury received the James Lewis Howe Award. The award is named after James Lewis Howe,  who was a Professor of Chemistry and Head of the Department of Chemistry at Washington and Lee University.  “As one of the most distinguished chemists in the Blue Ridge Section, we have chosen to name our annual awards to outstanding students in his memory,” says  the section’s literature. 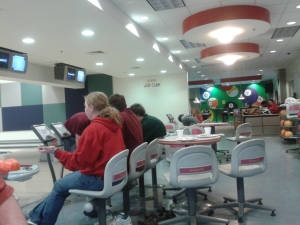 Our last meeting of the semester and our spring picnic was held on Wednesday, April 25. During our normal meeting time, our members played in a Jeopardy game. Also, during the meeting, the new officers for the next year were announced, and they are:

The CSAT STEM Club will be having their final faculty talk on Thursday, April 26 at 5:30 p.m. by physics professor Rhett Herman in Reed 208.

We look forward to a lot of fun activities and community service events for next year!