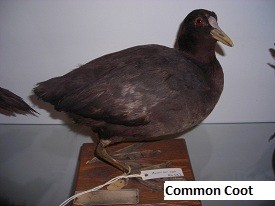 Universities and museums depend on taxidermy to preserve their collections for future generations, and Radford University possesses its own bird collection to be proud of. Some of our oldest specimens are over 100 years old. The amazing durability of our specimens can be attributed to careful keeping and the skilled work of taxidermists of the early 20th century.

A hundred years ago, a taxidermist started by recording data on his bird. A good taxidermist learned the natural pose of the bird: how the feathers lay, its stance, the shape of the body, and more. This information would be used later when building the new body and positioning the bird on a mount (Pray, 1913). Once all the information was recorded, the taxidermist laid the bird out and prepared to make the first cut.

The taxidermist made a shallow cut from the breast to the cloaca. Being careful not to damage the skin or the feathers, the taxidermist pried the skin from the body. For the legs, he used a pair of scissors or a scalpel to cut the knee joints, keeping the legs for future use. The wings were initially cut at the shoulder joint, but later were peeled, the muscles removed, and bones kept. When the taxidermist reached the head, he removed the skull and cleaned it as well as removed the tendons from the legs, keeping the bones as he did the wings (Pray, 1913).

The taxidermist cleaned the skin first by scraping the remaining fat and tissue from it with a sharpened spoon or a dulled knife. He washed the skin in soapy water and used plaster of Paris to dry the skin. Once the skin was dry, the taxidermist created a body either by shaping a plaster mold or by forming one from wood wool. Both the body and inside of the skin were treated with arsenic to keep moths away (Pray, 1913).

Now the taxidermist could assemble his bird. Using wires, he reformed the wings, replaced the skull and legs, and stretched the skin over the new body. The taxidermist wrapped wire around the bird to keep its wings against the body and placed it on a flat mount for about two weeks so the skin could set. Once set, everything was removed and the bird was ready for display in a collection (Pray, 1913).

Taxidermy is a little different nowadays. We use hairdryers or similar tools to dry the skin (Grantz, 1969) instead of plaster of Paris. To do less damage to the birds, displays are treated instead of the skin and bodies (Dr. Karen E. Francl, personal communication), and Borax is used as a safer alternative to arsenic (Grantz, 1969).

Collections are an underappreciated resource to many. Unless they are a science major, a student might not even be aware of the treasure troves of knowledge and history inside of Reed and Curie. Each one of the more than 700 specimens in Radford’s bird collection has a distinct history of how it came here. Through our collection, our university is connected to places such as the University of Notre Dame and the Smithsonian National Zoological Park. The diversity of our collection, from transfers from other universities to immigrants from Europe, Asia, Australia, and South America, comes to resemble our own diversified campus.

Science and non-science majors alike benefit from our collection. Besides providing educational value to biology majors, displays allow students to observe species they’d never see otherwise (Francl, personal communication). Displays are like a private zoo for students to enjoy where they can see many species that wouldn’t be together in real life side by side, such as the four birds pictured below. With 228 bird species from 23 orders, students can see the colors, proportions, and vitality of specimens that a photograph or model can’t capture.

Next time you walk down the second floor hallway of Reed-Curie, maybe stop for a moment and appreciate the delicate work it took to put them there for you. 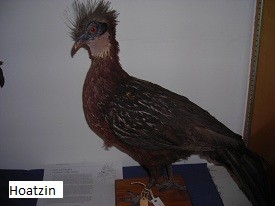