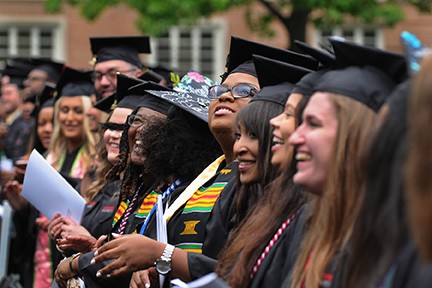 What are recent Sociology graduates doing after leaving Radford?

Misty Daniels (2014) is a Junior Research and Reporting Analyst with Patient Advocate Foundation.

MaryKathryn Aldrich (2013) has accepted the position of Medical Liaison with Commonwealth Catholic Charities Refugee Resettlement Department, where she interned in her last semester.

Mary Dickerson (2013) received her M.S. of Education at Radford University, concentrating in Curriculum and Instruction with licensure for Secondary Social Science, and is a Teacher at Check Elementary School.

Ashlie Tubb (2013) has accepted a position as Research Assistant with CoStar.

Heather Wright (2013) is a Research Assistant at the Computing Research Association's (CRA) Center for Evaluating the Research Pipeline in Washington, D.C.

Isabel Wu (2013) is a graduate student in history at Appalachian State University, where she was awarded a teaching assistantship, and a second assistantship in the teaching excellence and achievement program.

Cameron Bennett-Hattan (2012) is a researcher with CoStar.

Jess Chandler (2012) is a Counselor with Valley Community Services Board in Staunton.

Michael Gibbs (2012) is in the Master's of Public Policy program at George Mason University. He is pursuing this degree along with a graduate certificate in National Security.  He is co-author with Dr. Mekolichick of "Understanding College Generational Status in the Undergraduate Research Mentored Relationship," appearing in the journal CUR Quarterly.

Jessie Altice (2011) is completing her Master's degree at the University of South Florida in Tampa, where she has been admitted to the Ph.D. program for fall 2016 and has been awarded a graduate assistantship.

Jess Bellamy (2011) held a summer internship with the National Opinion Research Center at the University of Chicago.

Thomas Bowman (2011) took an internship with Invisible Children.  He worked as a "Roadie," traveling the U.S. as part of a group raising awareness about the exploitation of children in central Africa.

Amy Dove (2011) is in the Counselor Education Master’s Program at Virginia Tech and has an assistantship with VT's Center for Survey Research, building on an internship she had there.

Sarah Fischetti (2011) is a Victim Witness Advocate with the Women's Resource Center of the New River Valley, following an internship she held with the WRC.

Caitie Hennessy (2011) is a Public Health Analyst in the Community Health Promotion Research Branch of RTI International.  She earned her position in part because of her year-long research experience at the Center for Social and Cultural Research and Virginia Tech's Center for Survey Research.

Aysha Bodenhamer (2010) earned her master's degree in 2013 and is continuing in the Ph.D. program at North Carolina State University.  She is studying rural sociology and global development, and is a teaching assistant in her department.  Bodenhamer won the Ron Wimberely Paper Award in Rural Sociology at the 2013 ASA conference, and in 2015 she won a Doctoral Dissertation Award from the Rural Sociological Society.

Jasmine Briggs (2010) is a graduate student in the higher education program at Old Dominion University studying student affairs administration.  She has an assistantship in the Office of Student Activities and Leadership.

Kari Elliott (2010) works for the Office for Children in Northern Virginia.

Gregory Hartbarger (2010) is working as a Rehabilitation Coordinator.

Alex Williams (2010) is a Management Analyst with government consulting firm Skyline in Washington, DC, while continuing work on his Master's of Public Administration at Virginia Tech.

Michael Hickman (2009) is a Staff Data Analyst with the National Industries for the Blind.

Alicia Ring (2009) earned her MAEd in Educational Leadership and Policy Studies at Virginia Tech and currently serves as a Counselor for the Student Support Services program at Wytheville Community College.

Jeannie Fry (2007) is a Researcher at Johns Hopkins School of Medicine in the Behavioral Pharmacology Research Unit, and co-author of an article appearing in the journal Drug and Alcohol Dependence.

Jenny Davis (2006) earned her Ph.D. in Sociology from Texas A&M University in December 2012 and accepted an offer from James Madison University as an Assistant Professor.  She is a regular contributor to the sociology and technology blog Cyborgology.  Check it out here.