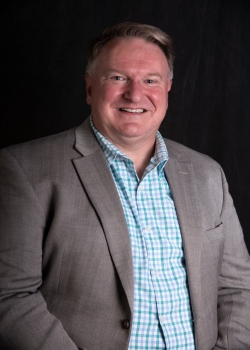 Dr. Chapman Rackaway is a scholar with a mission: to enhance the knowledge and leadership skills of students and faculty.

Dr. Rackaway comes to Radford having served as Director of Civic Engagement and Professor of Political Science in the Department of Civic Engagement and Public Service at the University of West Georgia (UWG).  From 2017 to 2020,  Professor Rackaway was Political Science Department Chair.  While Chair, Dr. Rackaway increased undergraduate and graduate enrollment, revised the major curriculum and assessment program, improved student learning outcomes and increased student retention and persistence.

Previously, Dr. Rackaway was on faculty at Fort Hays State University (FHSU), where he held a variety of roles including President of the Faculty Senate, General Education Director, Chair of Political Science, and Dean of the Graduate School from 2003 to 2017.

Civic engagement has been a central part of Dr. Rackaway’s mission, having participated in the AASCU American Democracy Project since 2003.  Rackaway serves the ADP National Committee as a Civic Fellow as the convener of the Georgia Caucus of ADP universities.

Dr. Rackaway is a frequently published author.  Rackaway is the author of Civic Failure and its Threat to American Democracy: Operator Error (Lexington Press 2016) co-editor of Parties Under Pressure (Palgrave 2017) and The Unorthodox Presidency of Donald Trump (2021), as well as other books on American politics, political communication, and voting behavior.  In 2015 Rackaway was named President’s Distinguished Scholar, FHSU’s highest award for scholarly productivity.