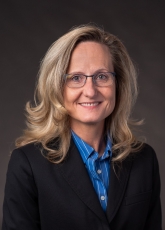 Dr. Rachel Santos earned her master of arts (1993) and doctor of philosophy (1996) in Sociology from Arizona State University in Tempe, AZ. From 1994 to 1999, she worked as a crime analyst for the Tempe, AZ Police Department where she conducted tactical, strategic, and administrative analysis as well as large-scale research projects and resource allocation studies. From 2000 to 2003, she was a Senior Research Associate and Director of the Crime Mapping Laboratory at the National Police Foundation in Washington D.C. While there she lead federally funded research and technical assistance projects for the National Institute of Justice, the Office of Community-Oriented Policing Services, and the National Traffic and Safety Administration in the areas of crime analysis and crime mapping, regional problem solving, problem analysis, community policing, racial profiling, school safety, and domestic violence.

From 2003 to 2016, Dr. Santos was faculty in the School of Criminology and Criminal Justice at Florida Atlantic University where she conducted federally funded research on institutionalizing crime analysis and crime reduction strategies into police agencies for the Office of Community-Oriented Policing Services, the Bureau of Justice Assistance, and the State of Maryland’s Governor’s Office of Crime Control and Prevention. From these projects, she has published many final reports, practitioner guidebooks, and articles for both academic and professional journals. During that time, she and Dr. Roberto Santos created Stratified Policing and have worked with agencies in the United States and internationally to implement the organizational model to institutionalize evidence-based crime reduction strategies into everyday police operations.

As Co-Director, Dr. Santos shares in the administration of the Center and manages large-level, grant-funded research projects that focus on identifying and testing practical police strategies. She conducts training and technical assistance for local police departments, county sheriff’s offices, and state police and serves as subject matter expert for large level federal initiatives. She has worked with the Institute for Intergovernmental Research, Police Executive Research Forum, the Police Foundation, CNA, and a Fortune 500 company. Finally, she regularly presents at local, regional, national, and international organizations and conferences, such as the FBI National Academy, the Southern Policing Institute, the International Association of Chiefs of Police, the International Association of Crime Analysts, the Center for Problem-Oriented Policing, and Environmental Criminology and Crime Analysis Group. Dr. Santos earned his Master of Science (2006) in Criminology and Criminal Justice from Florida Atlantic University in Boca Raton, FL and his Doctor of Philosophy (2013) in Criminal Justice with a concentration in Organizational Leadership from Nova Southeastern University in Fort Lauderdale, FL. Dr. Santos served in the U.S. Marine Corps from 1989 to 1993 (Desert Storm/Shield Veteran). In 2016, he retired from policing after 22 years with the Port St. Lucie, FL Police Department. As an officer, he worked in patrol, was a narcotics detective, and served on the St. Lucie County drug task force as well as the SWAT team. As a sergeant, he supervised patrol officers, persons crime detectives, the crisis negotiation team, and the K-9 unit. As a commander, he managed the criminal investigations division, the special investigations division, and professional standards, which included national and state accreditation, training, recruiting and hiring, internal affairs, and crime reduction accountability. He supervised the crime and intelligence analysis unit for 10 years, served as Acting Assistant chief in charge of patrol, and is a graduate of the FBI National Academy (Class 239).

Dr. Santos co-created a crime reduction approach, called Stratified Policing, that provides the means for a police organization to systematize and sustain proactive crime reduction practices taking “what works” and “making it work” within the police organization. He is active in assisting police agencies around the U.S. and internationally in organizational change, evaluation, and sustainability processes for institutionalizing proactive crime reduction strategies, crime analysis, accountability, and police/community engagement. He was inducted into the George Mason University, Center for Evidence-Based Crime Policy’s Evidence-Based Policing Hall of Fame for his leadership implementing evidence-based practices and conducting experiments to test the effectiveness of proactive police strategies.

As Co-Director, Dr. Santos shares in the administration of the Center and management of large-level, grant-funded research projects. He has served as a subject matter expert for the Office of Community-Oriented Policing Services, Bureau of Justice Assistance, Maryland Governor’s Office of Crime Control and Prevention, as well as organizations, such as the International Association of Chiefs of Police, the Institute for Intergovernmental Research, the Police Executive Research Forum, and the National Police Foundation. He conducts training and technical assistance for local police departments, county sheriff’s offices, and state police where he works closely with leadership as well as operational personnel to integrate policies and best practices into day-to-day police operations. He has been invited to present by the Vera Institute at the Senate Judiciary Committee at the Capitol in Washington DC, as well as for a wide range of organizations such as the International Association of Chiefs of Police, the Southern Policing Institute, the Virginia Chiefs of Police, the Center for Problem-Oriented Policing, and the International Association of Crime Analysts.