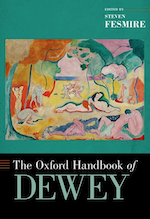 Steven Fesmire is Chair of the Department of Philosophy and Religious Studies and Professor of Philosophy at Radford University, and President of the Society for the Advancement of American Philosophy. He was honored with Radford's 2022 College of Humanities and Behavioral Sciences Distinguished Scholar Award.

His recent public philosophy work—most of which has been in the ambit of ethics, education, and politics—has appeared in places such as Salon, USA Today, The Chronicle of Higher Education, Inside Higher Ed, The Conversation, Huffington Post, The Humanist, The Key Reporter, Education Week, and Vermont Public Radio.  He is the author of John Dewey and Moral Imagination: Pragmatism in Ethics (Indiana University Press, 2003), winner of a 2005 Choice “Outstanding Academic Title” award.  He is also the author of Dewey (Routledge Press, 2015), winner of a 2015 Choice “Outstanding Academic Title” award.  Most recently, he is editor of The Oxford Handbook of Dewey (Oxford University Press, 2019), and he is completing two book manuscripts:  Beyond Moral Fundamentalism: Pluralism in Ethics, Education, and Politics, and Ignorance of Context: Cultivating an Ecological Imagination in Ethics, Education, and Politics.

Professor Fesmire was a 2009 Fulbright Scholar at Kyoto University and Kobe University in Japan, a 2015–16 Visiting Scholar at Dartmouth College, and a 2016 Fellow at the Institute for Advanced Studies in the Humanities at the University of Edinburgh in Scotland.  Prior to joining the Radford faculty, Professor Fesmire was Visiting Professor of Philosophy at Middlebury College and Professor of Philosophy and Environmental Studies at Green Mountain College in Vermont.

Here are some recent non-fiction books that Professor Fesmire recommends for anyone on the lookout for cutting-edge research on identity and American racial justice:

And here are some new fiction recommendations: