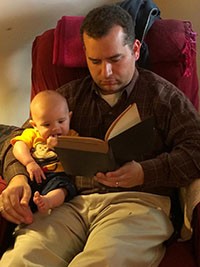 Peter Geromel was fortunate to begin taking college classes as a dual-enrolled student in ninth grade, becoming interested in teaching Philosophy as a high school senior. After completing his “Rat” year at Virginia Military Institute, he transferred to study Philosophy.

His interests lie generally in Neo-Platonic thought, with other esoteric interests in Zoroastrianism, Eastern mysticism, gothic horror (Vampire mythology and symbolism) and, more recently, Hutchinsonianism, a short-lived pseudo-scientific and strongly Trinitarian response to Newtonian physics. Ordained as an Anglican minister, he grew up around Eastern Orthodox, Byzantine and Maronite Catholic Christians. He has delved further and become quite familiar with Syrian, Malankara (Indian), Coptic Orthodox and Nestorian and Celtic Christianity. Having served several years as a hospice chaplain in the health care industry, he has practical interests in medical ethics related, especially, to end-of-life concerns.

Peter enjoys playing drums, such as the bass, Scottish snare, and bodhran, for Celtic music. He fiddled once upon a time and has practiced Okinawan ju-jitsu and fencing in the past (and maybe again in the future!). He looks forward to watching “Brit Crimes,” and hiking with his wife, Kari. They have three sons together.