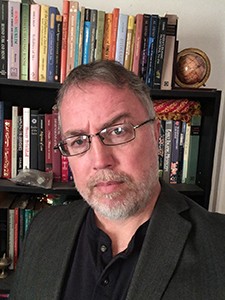 Dr. Eric Rothgery has more than 20 years experience teaching world religions. He specializes in religions of India (Hinduism and Islam, especially), although he also researches death, near death, and mysticism, as well as Lutheran approaches to world religions. He has also spent several years travelling through Asia and South America working on international university partnerships. He is currently working on book manuscripts that explore Hindu participation in Islamic healing rituals in ancient Sufi tombs in Hyderabad, India, as well as a project that explores death, near-death, and mysticism in world religions. He teaches in ways that imagine religious traditions as living, dynamic ways of life for generations of people and communities.  He lives in Roanoke, Virginia, with his three sons.  He enjoys camping, working with his hands—he owns his own remodeling business—and restoring his classic 1968 Chevelle muscle car.