the Newsletter of the Department of Philosophy & Religious Studies 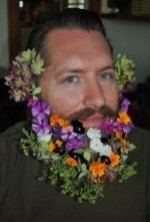 We hope you all had a great semester and get some well-earned rest over winter break. We will see you next year!

Dr. Paul Thomas, Associate Professor of Religious Studies, is the Department of Philosophy and Religious Studies chairperson. If you have questions about PHRE curriculum, the major and minor, or about the department, feel free to contact him at pthomas15@radford.edu.

The first student to email Dr. Thomas the correct answer to the following question gets a free Department of Philosophy and Religious Studies t-shirt!

Question: Owing to his large size and quiet manner, which medieval philosopher was known as "the dumb ox" while he was a student?

Whispers on the Wind 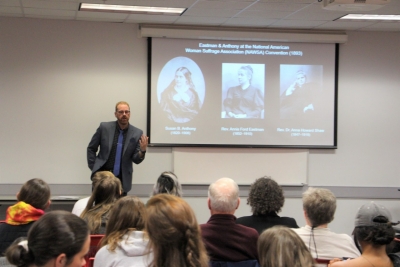 On November 7, Dr. Geoffrey Pollick gave a packed room presentation for the Center for Gender Studies titled From the Pulpit to the Platform, Women's Religious Leadership as Political Engagement in the 19th Century United States.

Also on November 7, at the "Holiday Smackdown," Dr. Paul Thomas successfully argued that the 2003 film Bad Santa was the greatest holiday movie of all time. Consequently, he is now working on salvaging his reputation.

Ms. Pamela Mullins picked up a contract for her book. Titled Misrepresenting Black Africa in American Museums: Black Skin Black Masks,Ms. Mullins describes this book as "an examination of the the ways in which black identity in the United States is racialized and the creation of the concept of race, at the turn of the 19th century via an unexplored medium of Black African objects as displayed in U.S. museums." Forthcoming from Routledge, 2019.

Looking for a summer opportunity in philosophy? PIKSI runs a philosophy summer institute for under-represented students. Check it out HERE.

I believe though that taking these courses has better armed me to be prepared for at least most of the types of questions that may one day come my way. 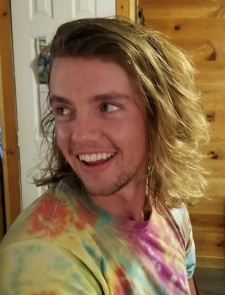 A former Department of Philosophy and Religious Studies major, Daniel went to graduate school and came back to us as an instructor of religious studies. We caught up with him to learn a little bit about his classroom approach.

What initially attracted you to Radford University?
My involvement in RU’s Appalachian Arts and Studies in the Schools (AASIS) mentoring program while at Grayson County High School was a big impact on me coming to RU. The program serves to support and foster cultural education and appreciation for potential first-generation Appalachian American college students. Ultimately, a sense of place and the value of family, both reinforced through AASIS, brought me here initially, being both close enough to and far enough away from home.

What inspires you as a teacher?
A huge source of inspiration for me is seeing my students engaged, listening, and absorbing the class and its content. To see eyes light up as they make connections between Weber’s thesis about capitalism’s development in the West, Protestantisms, and the American Dream often gives me goosebumps. Regardless of the stone we overturn, there’s always some religion clinging to it for us to explore. Another source of inspiration for me is knowing that for the majority of my students this will likely be the only religious studies class they’ll ever have, so I have one shot to foster some reflection in how they conceptualize religion, reality, and themselves in relation to all of this.

What do you find most challenging about the classroom?
I think what I find most challenging about the classroom is knowing that as contingent faculty, I (like many of my colleagues) sometimes struggle juggling being a teacher while also maintaining other jobs to make ends meet, all while pursuing further education. I think in the end it forces us to emphasize efficiency over quality, which I think may ultimately jeopardize the discipline’s existence specifically and higher education more broadly.

What advice for doing well in the classroom would you offer students?
Turn on, tune in, drop out. Or something like that.

Why do you think education in religious studies is important?
What I try to impart to my students is that religion is everywhere: from the TV commercials they watch, “secular” holidays they celebrate (or avoid), secularism itself, capitalism, relationships, popular science, nationalism, conceptions of social identity, and so on. If we can recognize the humanness of these things then we can go a long way in finding ourselves as agents within and perhaps against them, as opposed to seeing these categories merely as solid, unchanging objects of reality. The world is and is absolutely not finished being made. Humanity is beautiful and tragic, often at the same time, and I hope to pass that along to somebody.

Declare a Major with Us!

World turbulence and discord got you down? Looking for some bright spots in seemingly gloomy times? Consider a major or minor in philosophy and religious studies. In our classes you can explore some of the most vexing problems faced by society today and explore ways in which other cultures have found meaning in the face of challenging problems. New course substitutions make majoring in philosophy and religious studies easier than ever and our 30 credit major makes us one of the easiest double majors! Stop by CHBS 4209 for more information or email pthomas15@radford.edu. 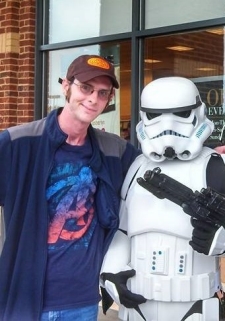 What attracted you to the philosophy and religious studies major?
I took up preaching as a lay speaker at my church and was thinking about following through with that to do preaching as an actual job. While I was still making up my mind about doing that, Johnathan Webster, who most of you know as an adjunct teacher here on campus and who I know as a scoutmaster, pastor, and friend laid out an education path for me to follow if I ever decided to commit to becoming a preacher, recommending I start here at RU.

How has taking philosophy and religious studies courses benefited you?
Nobody maintains their ideas or belief structures in a vacuum. The world is full of competing ideas and ways of looking at things, and thanks to social media even if you’re not looking for those competing ideals they will find a way to find you. I believe though that taking these courses has better armed me to be prepared for at least most of the types of questions that may one day come my way, and to be a better witness to those who understanding the different mindset from which they come from is a must.

Which classes have been among your favorites?
I’d have to list Dr. Jordan’s class on religion in India because I learned the most new information in it, and Dr. Axtel’s PHRE class on philosophy of movies because we get to watch movies once a week and then follow it up with discussing the philosophy of what we just watched. What could be more fun than that? I do that anyway after watching movies to my unwilling tolerant friend’s dismay who go to the theaters with me, and now I can do that for Core 202 credit? That’s like earning a day off from work to play video games if I just agree to eat some chocolate cake. More people should sign up for this class.

What do you plan to do after college?
When I’m completely through with getting my education I plan to pursue a career as a pastor in the United Methodist Church, or in the event that it splits in two after the next general conference I suppose I’ll be joining the whatever denomination comes out of the Wesleyan Covenant Association in the split.

Why should students consider a major in philosophy and religious studies?
Religion is the bedrock of culture itself. If you are pursuing a career as a diplomat, ambassador or representative of any kind, or if you’re pursuing a career that puts you face to face with a variety of cultures you may need to understand and respect on some level this would be a good major for you. This can even apply to helping you understand parts of society and culture you wouldn’t normally think of as religious. Football tailgate parties, chanting activists at political rallies, nerds in costumes at conventions, fans of celebrities defending there idol on social media comment threads; in all these things you start to recognize very familiar elements in when you major in religion. 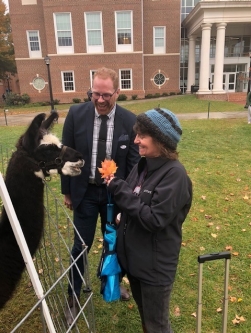 Election alpaca gets the votes of Dr. Sharon Hartline and Dr. Geoffrey Pollick.

Philosophy and Religious Studies in the News

Is the human brain hackable? Check out this story at The Guardian.

A Catholic cathedral in Calogne, Germany, adds a Pope Francis gargoyle. Read about it here.