Radford University welcomes Dr. Neville McFerrin (Ohio University), who will deliver a presentation entitled "Stone, Light, and Skin: Gender and Materiality in the House of the Dioscuri." 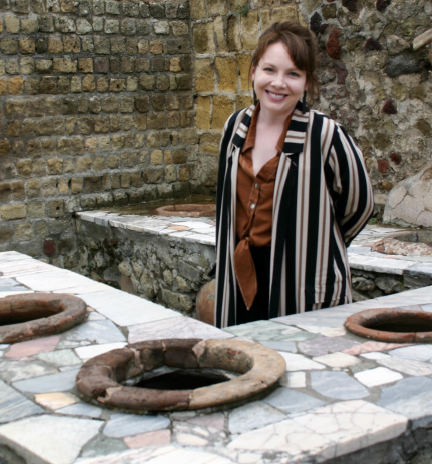 Neville received her PhD in Classical Art and Archaeology from the University of Michigan. Her work focuses on the intersections between power, prestige, and perception, using depictions of dress as an interface which allows her to consider otherwise underrepresented groups. To integrate multiple perspectives into her analyses, she utilizes multiple streams of evidence, considering architecture and space, bodies and adornments as part of a mutually referencing and mutually constituting system. Her published articles consider topics ranging from the use of mirrors in the House of the Gilded Cupids in Pompeii, to reconsiderations of gender on the reliefs of Persepolis. She currently serves as a Visiting Assistant Professor in the Department of Classics and World Religions at Ohio University.

For first century CE Latin authors, the relational qualities of gender are expressed metaphorically and oppositionally. Through mutually exclusive binary constructions, they generate hierarchies of being that resonate through their texts into the present. For such writers, the impenetrable hardness of the bodies of idealized citizen men, constituted through work, contrasts visibly with the soft, yielding bodies of women, crafted to be viewed, underscored by the imposition of expensive, imported luxury goods onto the visible frame. Yet, in the houses of Pompeii, such constructions themselves prove to be fluid. Through consideration of the interplays between bodies, materiality, and the materials of dress, this discussion argues for a reconceptualization of Roman gender norms. Using the House of the Dioscuri in Pompeii as a lens through which to interrogate both perceived bodies and bodily perception, it suggests that the treatment of dressed bodies in this space highlights not gendered dichotomies, but performative negotiations. It highlights the disjunction between viewership and embodied experience to consider the ways in which pluralities of identity are constructed and reinforced through ornamentation and through metaphorical connection with the materials that constitute ornaments. Focusing on paintings in the house that juxtapose cross-dressing heroes, hermaphrodites, and mythological women, the visual program of the House of the Dioscuri takes stone, fabric, and metal—the materials of dress and of textual differentiation alike—as tools for interaction, framing their wearers as self-conscious social actors, figures with the capacity to generate and reinforce identities at will.