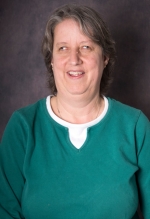 Dr. Suzanne Ament teaches Russian, East European and world history. She received her Ph.D. at Indiana University in 1996 in Russian history with minors in East European history, voice performance, and cultural anthropology. Her research areas include the history of Russian Revolutionary songs, The role of popular song in  World War II in the USSR, and the music duo Ivashenko and Vasiliev who performed in Russia during the 1980s. She also has great interest in the practice and methodology of oral history. Dr. Ament considers herself a world citizen, having lived and traveled in the USSR and Russia for a total of two years, studied in the former Yugoslavia, and traveled in China, Turkey, Romania,  Israel, Mexico, and Western Europe. Her favorite quotation “The Earth is but one country and mankind its citizens” from the founder of the Baha’I faith sums up her view of the world. Since she has been blind since birth, she does her work and traveling with a partner--currently her fourth Seeing Eye Dog, Ulla.  She was awarded the prestigious Melvin Jones Award by Lions Club International for outstanding service.