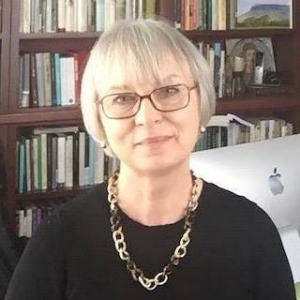 Professor Wawrzycka, originally from Poland, earned her PhD from SIU-Carbondale and her MA and BA from the University of Wrocław [pron. vrots-waf], Poland. She teaches literary theory and criticism, world literature, Anglo-Irish literature, and “Nobel Prize” literature. Between 2002 and 2015, she directed a Study Abroad Program, “European Literary Trails,” based in Ireland and Italy. Her research interests also include translation studies and philosophy. She translated Roman Ingarden's treatise On Translation and poetry by Czesław Miłosz into English, and poems by W. B. Yeats and James Joyce into Polish: her translation of Joyce’s Chamber Music as Muzyka intymna was published in Poland in 2019.

“I like to make words work," she says. "When they behave, they mean. When they misbehave, they are like marbles on a staircase: going places we never intended them to go, fostering meanings we never meant. But that's why I like words: for their marble weight, their smooth turns, and their polished cool.”

Dr Wawrzycka is the winner of the 2021 State Council for Higher Education in Virginia’s Outstanding Faculty Award and holds the title of 2021 Dalton Eminent Scholar. In 2018 she won the Radford University Foundation Outstanding Scholarship Award, and in 2017, the College of Humanities and Behavioral Sciences Outstanding Scholar Award. She is also the recipient of the 2009 Donald N. Dedmon Teaching Professor Award; recipient of Award for Innovative Excellence in Teaching, Learning, Technology, and the 2007 Nominee for the Ernest L. Boyer International Award for Excellence in Teaching, Learning and Technology.

A Joyce scholar, she has served as Trustee of the International James Joyce Foundation and is a member of editorial board of James Joyce Quarterly and board of advisors of Joyce Studies in Italy.

Her publications include five edited and co-edited books:

She contributed book chapters and introductions to Retranslating Joyce for the 21st-Century, Reading Joycean Temporalites and James Joyce’s Silences mentioned above, as well as to Publishing in Joyce’s Ulysses (Lieden: Rodopi/Brill 2018); A Joyceful of Talkatalka (ed. Baccolini et al, Bologna University Press, 2011); Joyce in Context (ed. McCourt, Cambridge UP, 2008); Reception of James Joyce in Europe (ed. Lernout and Van Mierlo, Thoemmes 2004); Twenty-First Joyce (ed. Beja and Jones, UP of Florida, 2004); and ReJoycing: New Readings of Dubliners (ed. Bosinelli and Moser, UP of Kentucky, 1998 and a few others. Among her other publications are chapters in books on Milan Kundera and Roland Barthes, contributions to James Joyce Quarterly, Joyce Studies in Italy, and Papers on Joyce (Spain).

As guest-editor, she curated special issues of James Joyce Quarterly (2010) and Scientia Traductionis (2010; 2012) on Joyce and translation.

She has served as reader of manuscripts for PMLA, Anthem Press, Oxford University Press, the University Press of Florida, Ashgate Publishing Group, Wadsworth, and Pearson Longman. She is listed in Acknowledgements to the third edition of Theory into Practice (Anne Dobie, Wadsworth 2009) and to the sixth edition of Handbook of Critical Approaches to Literature (Guerin et al, Oxford 2011). Her book reviews appeared in James Joyce Quarterly, JJ Literary Supplement, Breac, English Literature in Transition and England-based James Joyce Broadsheet.

Before coming to the US, Dr. Wawrzycka worked as a translator and interpreter in Poland.