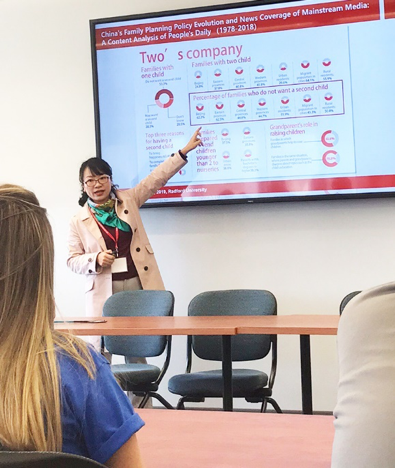 Dr. Juan Liu from SWUPL at the VACAS Conference in April 2019

Professors Juan Liu and Jainping He from Southwest University of Political Science and Law in China in China added to the array of presentations at the recently ended VACAS Conference hosted by the School of Communication at Radford University.

Liu’s and He’s study entitled “China's Family Planning Policy Evolution and News Coverage of Mainstream Media: A Content Analysis of People's Daily (1978-2018” focused on the efforts the Chinese government has made to control the rapid population growth.

China was the first country to ever hit the one-billion population mark. The government understood efforts must be made in order to quell the growth before a crisis began. Since 1978, China’s government has instituted a family planning policy and that policy has continued to evolve overtime.

In the beginning of the policy, in 1978, there was only a one-child policy. That policy would continue until 2014 when a two-child policy was created. The new policy would allow a couple to have another child if the first was a girl and is often referred as the 1.5 policy. This shows how different the Chinese culture is compared to the United States, as they emphasize a son continuing the family name as a role that is significant enough to influence the country’s population policy.

The policy has influenced Chinese culture so much that now couples are less likely to have a child; causing the growth rate in China to continue to decrease. This has also brought a problem, that Lui and He mentioned in their research, known as the 4-2-1 scenario. This scenario is when a family has four grandparents, two parents, and one child. This has caused hard financial strain on families who have to support their own parent and a child; while also making it more difficult on the child to do the same after them.

Liu said that China “doesn’t have a perfect policy,” but the policy has helped solve the population problem. Today, the policy is starting to become less popular in China since the goal it was put in place for has already been met. It may be effective, but it is “a cruel policy,” Liu remarked.

The population policy has also caused an influx in the male to female ratio in the country. Currently, for every 100 females in China, there are 117 males. The government had done a lot to fix the population crisis, but after this study, it is evident that something about the policy needs to change.

From their content analysis, Liu and He conclude that the “diachronic trend is declining,” noting that “policy improvements need to occur,” in order to increase support again.