VACAS Conference 2019-The State of the Profession 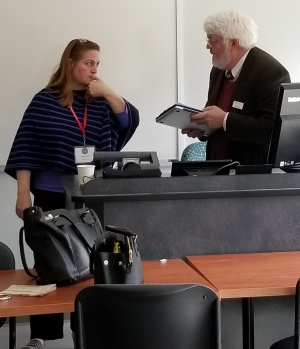 In a global society ruled by the spread of information, journalists have an important, if often thankless job. The job of journalists around the globe is made much harder however by the dangers they can face for being watchdogs trying to get information to the people.

Incidents like the assassination of Saudi Arabian and Washington Post journalist Jamal Khashoggi last October serve as an example of the dangers journalists stand up to in their line of work.

“Under Attack: The Risks and Rewards in Reporting” at the VACAS conference hosted by the School of Communication at Radford University aimed to shed light on these dangers and help aspiring journalists to also stand up to these dangers.

The panel was chaired by Professor Leigh Anne Kelley, an instructor in the School of Communication at Radford University. Panelists from the School of Communication included: Dr. Bill Kovarik, a long time journalism professor and accomplished eco-journalist, Dr. Twange Kasoma, an associate journalism professor and journalist in her native country of Zambia and Denny Price, a senior in media studies. The final panelist was Nick Mullins, a former coal miner and citizen journalist covering Appalachia.

The event was a meeting of the minds from all different backgrounds sharing personal stories and information about the dangers behind getting the truth out there.

The first presentation was that by Price who shared a project she has been working on about former Richmond Planet Editor, John Mitchell Jr. Price explored how it is unfortunate that not many know of Mitchell Jr. and his accomplishments as a civil rights activist and journalist. She described Mitchell Jr. as the Richmond Planet’s “Fighting Editor” who would bravely face death threats and threats of violence to continue his civil rights activism and journalistic duties.

Kovarik, who supervised Price’s project, mused that the most interesting tale to him about Mitchell Jr. was going to cover a lynching in a very racially divided county and being threatened that “he was next” before Mitchell Jr. threatened the men with the pistol he had been carrying.

Kasoma’s presentation hit very close to home for her because it was centered around the tales of resilience from journalists in her home country of Zambia. She stated that she knew everyone she used as an example in her presentation -- one even coming in the form of her own sister, Lesa Kasoma of Komboni Radio.

Kasoma spoke of the idea of not intimidating messengers and chroniclers of events should be the rule of thumb for interacting with journalists, but that is unfortunately not always the case. She cited examples of colleagues such as Derrick Sinjela, who is currently serving 18-months imprisonment in Zambia, and Chanda Chimba III, who was also imprisoned in 2016 for his documentary “Stand Up For Zambia” to demonstrate that journalists in other countries can sometimes pay a hefty price. Kasoma said that, “The onus is on us, as journalists, to persevere.”

Nick Mullins was the third to present and talked about the threats even citizen journalists can face in the United States. Mullins, a former coal miner himself, used anecdotes in talking about the dangers he could have faced as a citizen journalist working to speak out about the injustices coal miners faced. Miners had minimal labor rights and Mullins described them as a “captive workforce.” Mullins wrote articles about the injustices he and his fellow miners faced but had to do so under a pseudonym, lest he face losing his job as the mining companies could fire you for any possible reason they saw fit at the time. The media relationship with Appalachia was strained due to the area being portrayed in a harsh light and led to a documentarian being shot in Eastern Kentucky.

Kovarik summed up the entire philosophy of the attitude towards journalists while summing up the mistreatment of journalists on the global stage. “We’re always going to be inconvenient. If it’s good, ethical journalism it will stay that way. We’ll always be inconvenient.”