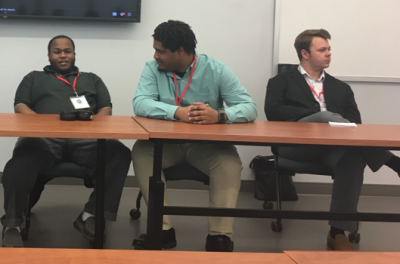 Radford University held its very first Virginia Association of Communication Arts and Sciences conference, which attracted participants from several universities within Virginia and a delegation from Southwest University of Political Science and Law in China.

The VACAS conference was a two-day conference which started on Friday March 29, 2019 and ended Saturday March 30, 2019.

Blake Barefoot, a Radford University student, composed a qualitative content analysis, which examined drag queen culture in contemporary American culture.  Barefoot expressed his fascination with drag queen culture, through a presentation. “I find a lot of interest in any group of people that might not meet your everyday American lifestyle,” said Barefoot.

In order to get a better perspective of drag culture, Barefoot analyzed media and even had the chance to interview Kristina Dupree Davenport Kelly, a DC based drag queen.

During his interview with Kelly, Barefoot asked a series of questions focused on the messages conveyed through Drag performance.  When questioned about the message she expresses through her performances, Kelly stated that her performances convey the message “To live for today because tomorrow is not promised.”

Barefoot used his platform to educate the public about the many misconceptions and truths about drag queen culture.

“A common misconception about drag queens is, a lot of times people believe a drag queen is doing drag because she is transgender…but that’s not what drag is. Drag is the act of performing in alter ego,” said Barefoot.

Barefoot identifies with the LGBTQ+ community and as he got older his passion sparked. Barefoot’s passion stemmed from his desire to learn more about gay rights and the history behind it. “As I got older, I started learning more about activism…and a lot of the times, the people that were out protesting were usually drag queens and transgendered women…They were brave to do so…I applaud and commend them for their activism,” said Barefoot.

Drag was not the only underrepresented group which was featured during this VACAS session.

Trae D. Price, a media studies senior concentrating in production technology at Radford University produced a documentary on the Literacy Center of Virginia.

Price’s documentary showcased the development and progress of a particular student within the center. According to Price, “This just seemed like a good opportunity to do something that mattered. Something that could showcase some under-privileged people and an organization that could use all of your attention.”
Similarly, Shakis Moore, another senior in production technology at Radford University also produced a documentary on literacy development focused specifically on the development and progress of a literacy student.