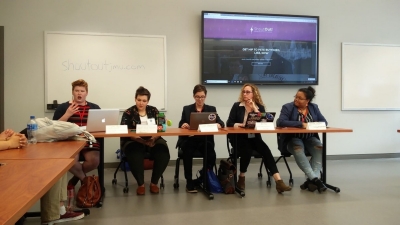 Five people came to Radford University from James Madison University to discuss their success with a student-led blog they had recently made into a for-credit class, shoutoutjmu.com.

The five formed a panel -- led by two instructors and three former bloggers, titled “Shouting Out! Interrupting Academic Gatekeeping and Promoting Student Writing in the Digital Sphere” -- at the recent Virginia Association for Communications Arts and Sciences conference. The conference focused on “Redrawing Boundaries.”

The panel’s focus was about the process of getting the class added to the communications curriculum and the experiences the writers had blogging for it.

The blog began as an unpaid, uncredited class. At first it had even less leadership than it does now. The class is entirely student-run and focused on student presentations. They arrange their desks in a semi-circle pattern to better facilitate discussion.

Everything the students publish online is credited to an anonymous username. Katie Lese and Sarah Mayhak, the instructors, said it was an answer to the challenge of “online trolls.”

A major topic of the panel was the advantages that their blogging class had over traditional styles of classrooms. In fact, it was a big selling point of the class.

“Honestly, for me, the idea of the class was so unique,” said Elise Roberson, one of the panelists who was a writer for the blog. “I was so used to traditional lecture stuff, that the fact that I could sit in a class and write unique articles with people that I’m close to as a class credit was really interesting to me.”

A large part of how this class “interrupted academic gatekeeping” was the nontraditional classroom environment which, as one of the panelists, Soph Margulies, described it, “allows the students to become the professors.”

The blog has a very clear focus on intersectional feminism. Many of the members of the class come from a women’s and gender studies background.

Cecily Thomas, one of the panelists, described how they were introduced to the blog.

“The first time I blogged, it was because I was introduced to it in one of my women’s and gender studies classes.,” Thomas said. “Some of the bloggers came in and said ‘Hey, blog for shoutout next semester’ and gave us the information that we needed to sign up. I thought it was really cool because I’d taken a couple women’s and gender studies classes and I thought, ‘Hey, why not try out blogging?’”

The blog has a one great advantage over traditional student media, and it’s the availability of the blog. JMU has a very competitive student newspaper, the Breeze. It can take weeks to get something published in it.

Another key difference is just how different blogging is from writing articles. Margulies talked about how, coming from a news background, they had trouble initially because they found themselves writing news articles instead of blogs; there are many differences between the two.

Margulies said, “One is also taking information, an even that happened in the news and critiquing it from your own perspective, from your own lens, which is not something you see in media outlets.”

Thomas also believes blogging has another advantage over traditional media.

“I think that there’s more chance for blogging to be accurate,” they said. “Especially because you’re able to include more links and give people other resources to check out instead of trying to make up the news yourself. It’s kind of like a combination of providing resources and your perspective.”

Thomas also said that the intersectional-focused blog allowed them to express their voice that they believe is not typically heard.

They maintain that within a “predominantly white institution” like JMU, their voice as a “queer person of color” is silenced. They believe the blog is an opportunity for them to “use the institution to fight the institution.”

The website is sponsored by the school, but it is entirely student curated. Students are able to write about whatever they like, but the vast majority of the content on the site comes from the feminist perspective.