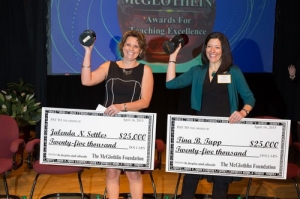 Tina Tapp ‘94 was shaking when her name was called as a winner of the McGlothlin Awards for Teaching Excellence in April.

“I was so excited. I felt very honored,” she recalled days after the ceremony. “I wasn't completely surprised, because I believe in what I do in my classroom. I was just so glad that the judges saw that and believed in what I do, too.”

Tapp, who earned a Bachelor of Science in English and teacher certification from Radford University and is a teacher at Radford High School, was selected for the honor among two other finalists in the secondary education category.

The McGlothlin Awards for Teaching Excellence, now in its 16th year and sponsored by the McGlothlin Foundation, Blue Ridge PBS and Radford University’s College of Education and Human Development, annually honors two of the Blue Ridge region’s best teachers.

At the ceremony, Thomas D. McGlothlin, president of the McGlothlin Foundation in Bristol, Virginia, presented  Tapp with with a check for $25,000 and a trophy.

The McGlothlin award winners must use a portion of their $25,000 prizes within a year for international travel or study to broaden their thinking and experience, and to further enhance their excellence as professional educators.

Tapp teaches a Holocaust unit in her classroom and plans to travel to Germany, Poland and Latin America “to follow the journey and show my students what that looked like” from where victims experienced the Holocaust to where many survivors relocated to rebuild their lives. “When we see more, our students get to see more.”

“This unit is important enough to me that I want to get it right with the students,” she said later. “Through my travels and experiences, I hope to be able to give the students a much clearer picture of things.”

Recalling a moment when someone asked her why she left teaching to work for The Today Show, Hager said she responded, “Because teaching is really hard,” drawing laughs from the audience. “I think we as a culture don’t appreciate how challenging it is, how intellectually stimulating it is and how rewarding it is.”

Tapp agrees. As a single mother of two daughters, Zoe, 12, and Summer, 10, she said it was important for her to model hard work and determination. “They are so proud of all the things I do in my classroom,” she said.

Tapp comes from a family that stressed education. Her father, Ed Baldwin, earned three master’s degrees from Radford University. Tapp’s mother, Pat Baldwin, M.S. ’82 – who earned her master’s and teacher certification at Radford – and grandmother were both teachers. And Summer wants to follow in the footsteps of her mother, grandmother and great-grandmother.

“I have been inspired by my mother and all the hard work she put into her teaching,” Tapp said. “She always went the extra mile to reach her students, and she taught me the same goal. It was very special to me to have my mother and my daughters there to see me recognized for my hard work. In fact, my winning, in a way, was like my mom winning, too – as she inspires such a large amount of what I have achieved in my teaching career.”