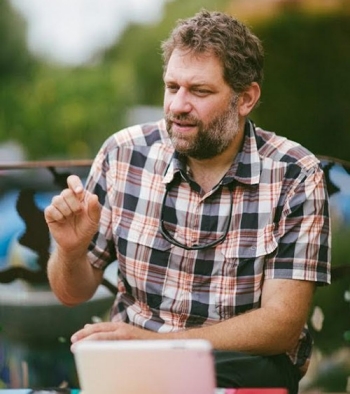 “After watching my older sister graduate from Radford University, I knew I wanted to do the same,” says T.C. Johnstone ’96, a director and producer for Gratis 7 Productions. “I liked the person my sister was becoming and the opportunities that Radford University provided her.”

Radford University was Johnstone’s ideal university because it was in state and the student population was reasonable.

“I wanted to go to a university where, if I did not know somebody, I knew someone that knew that person,” says the Loudoun County native.

Arriving at Radford University without a declared major, during his sophomore year Johnstone discovered a field that he never knew existed – and it sparked his interest.

“While I was on campus, I noticed an area outside that was surrounded with different climbing ropes and tall nets,” Johnstone explains. “I immediately walked into a nearby office where the department chair, Gary Nussbaum, told me that this area was only open to outdoor majors.”

“I have always loved the outdoors, and I had no idea Radford University offered majors in that department,” he says.

That same day, Johnstone walked to the admissions office to declare his major as outdoor recreation with a concentration in outdoor guiding.

“Looking back, it was one of the best things I could have ever done,” Johnstone adds.

Johnstone described his major as being two-sided. “About 20 percent of my major consisted of learning how to technically rock climb, backpack and cave explore,” he explains. “The remaining 80 percent focused on developing people skills.”

Johnstone believes that those people skills are invaluable.

“I learned how to relate to people, how to take a group through a good experience, how to problem solve, resolve conflict and how to have confidence when I was put into uncomfortable social situations.

“Just about everything that Radford University has taught me, I still use today with my filmmaking career,” says Johnstone.

Professor Gary Nussbaum had a profound impact on Johnstone’s life.

“He challenged me to not accept the status quo; he was not going to let me slip through the cracks,” says Johnstone. “Mr. Nussbaum is still a mentor to me today and I think that says a lot about Radford University.”

After graduation, Johnstone moved to Colorado with some of his friends from Radford University.

“I wanted to go somewhere that was a hub for outdoor recreation,” explains Johnstone. During the summers, Johnstone would serve as a wilderness guide, while in the winter he worked as a ski instructor.

“All of a sudden my dream became my occupation and it was awesome,” says Johnstone.

After a few years, Johnstone moved to Steamboat, Colorado, where he worked with high school students at an organization called Young Life.

“I started a Young Life chapter at Radford University in 1992,” he explains. “The job was a good cross platform between working with students, which I did at Radford University, and using my outdoor skills to take children on outdoor adventures such as backpacking, rafting and kayaking.

Johnstone would film his adventures from Young Life, which ultimately led to his passion for production and storytelling.

“One thing lead to another and I became interested in making movies,” he explains. “After my Young Life career, I moved to Los Angeles to be closer to the film industry.”

After about three months, Johnstone found work with companies such as Discovery and National Geographic, due in part to his strong outdoor and people skills.

“I would go on expeditions and be gone for two months in the woods with no problem because of the skills I learned at Radford University,” he adds.

Johnstone has won several awards as a documentary director and producer. He has produced numerous documentary and narrative films, including “Rising From Ashes,” which was executive produced by Academy Award-winning actor Forest Whitaker.

In 2007, Johnstone founded a production company, Gratis 7 Productions. The company has produced three award-winning documentary films and is currently working on releasing new films. Johnstone recognizes the importance of following your passion while in college.

“If you are going to make the investment into college, make sure you are passionate about what you are learning,” Johnstone explains.