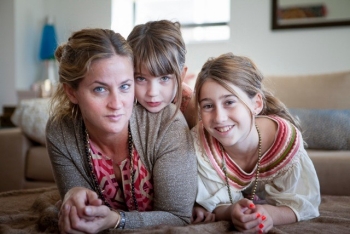 Stacey Fraser '90 with her daughters Belle and Sadie

Stacey Fraser ’90 came to Radford University to pursue her passion in fashion design. “In high school I was always designing and making my own clothes. I love colors and textures and always enjoy making something that is unique and stands,” says Fraser.

As a student at Radford University, Fraser seized opportunities to expand her expertise and experiences. “I did a semester studying in London and was able to do an internship for a small designer. This internship reassured me that I was in the right field. I also was interested in fashion because both of my grandmothers were in the business. It brings me such joy to know that we all share that passion,” says Fraser.

Today, Pink Chicken, Fraser’s fashion company sells to more than 250 stores nationwide and has its own retail stores in the Hamptons and New York City, Santa Monica, California and Charleston, S.C. “Our brand is really rooted in patterns. It is all about prints and colors,” says Fraser. Pink Chicken reflects her love of joyful patterns and casual easy dressing for girls and women.

Having her own company, though, was never on Fraser’s radar. Once she graduated, she took a leap of faith and moved to New York City. Leaving her family and friends behind her, she hit the streets in search of a job. “Things were different then because of no internet – I had to hit the pavement and the phone book. I would take my portfolio and physically knock on designers’ doors with the hope of getting hired,” says Fraser.

It didn’t take long for Fraser to get job offers, but she wanted to be sure she found the right fit. She knew though that working for a large company right out of college would be advantageous professionally in the long run, and, eventually, she was offered a position with Ralph Lauren as an assistant sweater designer.

Fraser was the third person to join the team responsible for developing the new baby line for babyGap. Then she took what she learned at babyGap and applied it at Tommy Hilfiger and helped the company develop an infant and toddler line.

After working in the corporate world for many years, Fraser was ready for something new. She began making clothes again for her daughters with the vintage fabrics that she had collected over time. “I had saved fabrics that I really liked and began making unique, one-of-a-kind dresses for my girls. As we would walk down the street, many people started to inquire about where I got the clothes. At that point, I knew I was onto something,” says Fraser.

In 2008, Fraser started Pink Chicken. It wasn’t an easy start. Fraser worked very hard to market her brand. Since Fraser had been in the business for a while and built relationships, she had connections to a well-known clothing store in New York City, Scoop. The company fell in love with the samples of Fraser’s work and quickly picked it up. With that credibility in her back pocket, she began knocking on the doors of different boutiques selling her up-and-coming fashion hit.

When Fraser was asked how the name Pink Chicken came about, she laughs and says “My family is a big part of this company and something we always say in our house to our girls, is ‘Eat your pink chicken.’ When my daughter saw chicken for the first time, she liked that it was pink, so pink chicken is something that has always stuck in our house. When coming up with names for the company, we wanted something that was very iconic. Pink Chicken worked perfectly.”

Fraser’s children, 13-year-old Belle and 9-year-old Sadie, play a vital role in the growth of the company. “They are going into the ‘tween’ phase and they give us lots of feedback on what kids their age would want to wear. They design their own shirts at home and always give me ideas,” says Fraser.

She encourages Radford University students today to not only hold on to their college friendships, but to pursue their dreams. “Follow your dreams. Follow what you love and don’t let anyone tell you anything differently. I went from Virginia to New York City all on my own and pursued my dreams. It isn’t easy finding a job you love, but if you are passionate about and good at something, it doesn’t seem like work,” says Fraser.

Fraser sometimes thinks about her life’s path that led to Pink Chicken. Design has always been a part of her life. Knowing that she is creating great clothes that others enjoy and including her children in the process makes all the struggles, challenges and successes worthwhile.