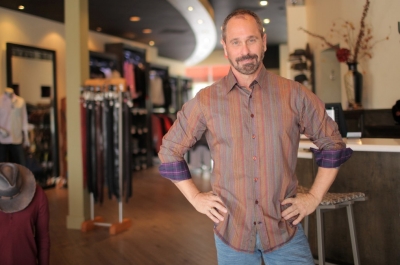 Told he might be a failure, Scott Moore proved an RU education equals success.

Scott Moore '81 of Tampa, Florida, is proof positive that a Radford education will take you to places and careers you've never imagined.

The founder of Urban Body Clothing, Inc., Moore's major at Radford was economics. Pardon the cliché but he was in the right place at the right time, though he didn't get much encouragement when he started his venture. The 1990s were a time when Moore found it challenging for men to find clothes in athletic fit, which are roomier in the shoulders and trimmer in the waist. "I'd rather cut off my arm than go to a mall," he says. "So I decided that if the need was there for me, it must exist for other guys."

He knew if he wanted it to become easier to find clothing that fit men his size, he'd have to do it himself. To say starting his clothing business was hard would be an understatement. "At that time it just wasn't done. I didn't expect to go on my first buy and be told by industry experts that I was heading for failure," Moore says. "I really had to examine my commitment as well as pay for all of my goods up front," which he says is unusual for the fashion industry.

Skip ahead a few years. The “metrosexual revolution” was beginning and just at the right time – or perhaps the wrong time – Moore opened Urban Body Clothing which he says "became the go-to-place" for the media to learn more about what is going on with the new generation of people, at least in fashion.

Moore recalls, "The media was all over it . The company was growing by 40 to 60 percent a year." He opened a second store in Orlando, which resulted in another wave of popularity.

"You have to manage that kind of growth carefully. The company's organizational structure wasn't geared for that so I had to react quickly and re-develop our core structure. I wasn't expecting that," Moore says.

"When you operate a small business you have to master so many skills, from the macro view of making sure that your business is staying true to your mission, to the myriad of competencies that make the business successful. For me, I have to be a marketing guru one day, a fashion buyer the next," Moore says. "Throw in store merchandiser, customer relations expert, financial manger, employee manager, fashion author, in-store events coordinator, and more. It is difficult to wear so many hats at the same time."

Another thing Moore didn't expect, nor did many others, was the economic crash in 2008 and 2009. Revenues dropped almost 70 percent "in what seemed like the blink of an eye." Moore believed in his business and remained hopeful that the economy would improve and eventually level off. "But the bottom just kept falling. It seemed like I was updating the company budget monthly. It was hard to go to suppliers and let them know that you were going to have to cut orders," he said.

Then came layoffs. Moore had to lay off many qualified employees who had served him well.  It was time to restructure yet one more time. "The good news is that we became lean and mean. I closed the Orlando store after 10 years, built out and moved into a new, upgraded and more visible space in Tampa. That allowed me to create a new revenue stream by adding women's wear to the mix. I certainly wasn't expecting all of that," he says.

Being the chief operating officer of a company requires commitment and believing in one's dream but Moore says it is also fun.

"I've always been a big football and baseball fan. It turns out professional athletes were seeking the same clothing. I've been able to meet and get to know many of my sports heroes! It is a great day when the quarterback of the Tampa Bay Buccaneers is hanging out in the store and interacting with your customers," Moore says.

Urban Body Clothing could be defined as unique, but the idea of such a business is popular elsewhere. Moore says he can point to more than a dozen stores in New York and Los Angeles that he admires.  “What makes us great is our knowledgeable staff. We know body types, we know clothing fits, and we know how to put them together to create the image that you desire," he says. "From day one, our mission has not been to sell clothing, but to help guys, and now women, support the image they want to project.”

Before starting Urban Body Clothing, Moore worked as Director of Expositions for the International Gas Turbine Institute of The American Society of Mechanical Engineers. He and his team of employees put together  large expositions and symposiums that covered North America, South America, Asia and Europe.

He traveled extensively for work. However traveling was something he was used because he came from a military background. "Ultimately, it was the overabundance of travel that pushed me to open Urban Body Clothing," Moore says.

David Anderson, former director of Residential Life, challenged Moore to always dig deeper and find out what his motivation was to succeed. Anderson believed people have to know themselves.

Moore says his Highlander experience is a bragging point. "There are so many aspects to the RU experience that make it outstanding. The overall approach to education combines in-class learning with the whole campus living experience," he says. "Where else can you get an education where you sit in a class of 10 with the professor, and then attend an economics mixer with your fellow students, the faculty and a lecture by one of the great minds that you've been reading about in your textbooks," he says.   The beauty of the RU campus, he says, lives with him and is an image he won't forget.

Scott serves on the Board of Directors of the Tampa Independent Business Alliance and is past chair of Pride & Passion, a fundraising event for the Tampa Museum of Art. Additionally he works with Equality Florida and is chair of the 2014 Equality Florida Gala in Tampa.

His words of wisdom to students is to enjoy and seek all of the Highlander experience.