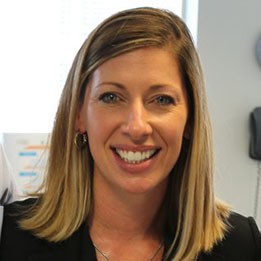 Sandy Lutton '93 helps to bring positive messages to the world. Lutton is Chief Revenue Officer at the Washington Speakers Bureau.

"You know how Hollywood actors have agents; well that is basically what we do for the lecture world.  We represent speakers and serve as the connection between them and our customers," says Lutton.

Lutton earned a degree in marketing from Radford University. After she graduated she knew she was ready to be in a bigger city, so she moved to Washington D.C. to take a temporary job before finding full-time employment.

“Not long after moving there, I got into the telecommunication industry. I learned a lot about the sales and business development side, which is where I found my niche,” says Lutton.

"They developed this position in order to create alignment. It is extremely vital that all departments such as sales, marketing and events, are aligned with one another and understand what the other needs," says Lutton. “When a speaker is booked, we walk with them through the whole process, making sure they are taken care of and the client’s needs are executed flawlessly.”

"We represent a wide variety of speakers. No matter who it is, we are making a difference," says Lutton. "Anthony Robles, an NCAA wrestling champion who was born with one leg, has changed the world of wrestling. He has recently become a client and now on his way to changing the world."

Lutton often thinks back to her time at Radford University and the inspiring leaders that she met.

"I remember during my freshman orientation I had the opportunity to meet Dr. Donald Dedmon. During my time at Radford, I can recall incidences where I would see him walking around campus. He was always so friendly and engaging," says Lutton. "To this day, I try to take my time to say hello, be friendly and just engage with the people that work for me."

“So many of the people who enter our doors are extremely smart, intelligent and inspiring,” says Lutton. “One person who left a strong impression on me was Mallory Weggemen, a female athlete that overcame adversity.”

When Weggemen was training for the Olympics, she received her final epidural injection to help with pain; but it caused her to never walk again. She didn’t let that stop her though and switched gears and started training for the Paralympics. She set a Paralympic record for 50 meter freestyle in swimming and won a gold medal.

“What really struck me about her was her attitude towards it all,” says Lutton. “She explained that she approached her ‘disability’ with the mindset of ‘what makes you different, is what makes you stronger.’ I will never forget that.”

Lutton encourages students to not take their time at Radford for granted. “Radford was truly some of the best years of my life. I learned so much about myself during those years, which I feel has led to my successes,” says Lutton. “Make the most of everything that the university has to offer you.”