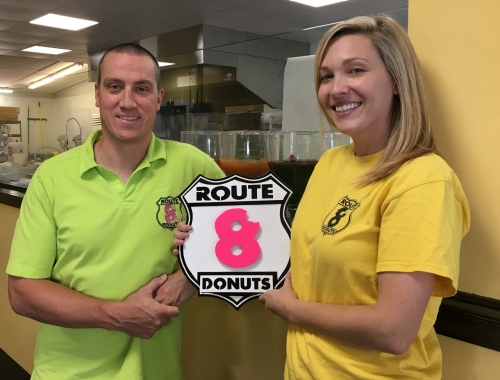 Radford alumni Kristen and Chris Nietzold turned their dream of a donut shop into reality when Route 8 Donuts opened its doors to the public on Sept. 5.

Opening a donut shop was a long-time dream of the Nietzold’s, something that stemmed from their shared love of donuts.

“I love making glazes and icing,” said Kristen Nietzold ’14. “We figured we could couple that with Chris’ skill of making the actual donuts.”

The Nietzold’s used what they learned at Radford to turn their dream into reality.

“My marketing classes were amazing,” Kristen Nietzold said. “I recommend them to anybody - especially those wanting to open a business. Professor Andrea Stanaland taught an amazing social media marketing class. If you want to know why we have 3,000 followers on Facebook, take her class.”

“It's always exciting to see students succeed beyond the classroom,” Stanaland said. “It's especially gratifying when one of my courses leaves an impression on them and contributes to their careers.”

“I learned a lot from her and enjoyed her class immensely - to the point of still using that marketing book today,” Kristen Nietzold said.

Chris Nietzold ‘10 also used what he learned at Radford University.

“A lot of it has to do with the social aspect of Radford University,” Chris Nietzold said. “The smaller class size really allows you to have a more direct relationship with your professor. You’re not just a number in a class. That’s why I chose Radford.”

“Professor Jerry Kopf teaches a business management class,” Chris Nietzold said. “We presented an actual business plan at the end of the course, something that I really drew upon when we started Route 8 Donuts.”

Kristen and Chris Nietzold drew from what they learned at Radford and “it was a perfect fit” for opening a donut shop in the area.

The Nietzold’s have advice for anyone thinking about starting their own business.

“You have to find a niche in the area that isn’t filled,” Kristen Nietzold said.

Route 8 Donuts is open from 6 a.m. until they run out of donuts Tuesday through Saturday.