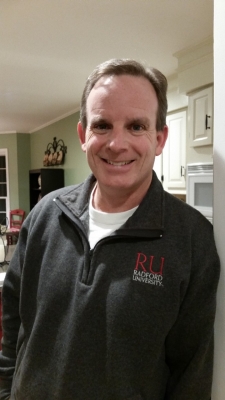 “When I first applied to Radford University, for an undergraduate degree in Criminal Justice (CJ), I was not successful, but I did not give up.  I was encouraged to reapply by my friend’s father.  Subsequently, I tried again and was accepted!”

“I embraced all of the opportunities Radford University had to offer.  As an undergraduate, I was involved in Residential Life as a Resident Assistant and was involved in the ‘Quest’ program during the summer.  These experiences helped me figure out who I was and where my strengths were,” says Rick Walker ’87, M.S. ‘89.

Walker graduated with a Master of Arts Degree and was voted the most “Outstanding Graduate Student” with a 4.0 GPA.  In addition, he was the first student in the CJ department to write a Master’s Thesis.  “I am grateful to Radford University for the opportunities and education that I received.  All of this happened because someone took a chance on me and for that, I am in forever grateful,” says Walker.

Years later, Walker was given the opportunity to repeat history.  “My oldest daughter’s babysitter Erin, wanted to be accepted into the nursing program at Radford University.  Unfortunately, the first time she applied she was not accepted.  I encouraged Erin to reapply and wrote a personal note to Dr. Donald Dedmon.  I explained my story and asked him to take a chance on Erin, just like someone took a chance on me.  Dr. Dedmon responded and the university accepted Erin,” says Walker.

Today, Walker is the Special Agent-in-Charge at the U.S. Department of Labor, Office of Inspector General (OIG).   A position he has held for the last six years.   “I manage the regional budget, 20 employees and more than 200 investigations.  I make sure my people have all the equipment they need to conduct their investigations and I approve all operational plans for search and arrest warrants.  I also serve as a liaison among the various agencies within the Department of Labor,” says Walker.

Prior to management, Walker served 11 years as a Special Agent for the OIG.  He investigated violations concerning government corruption, health care and workers compensation fraud.  Then, he spent eight years as Assistant Special Agent-in-Charge, a front line supervisor.    After a total of 25 years in law enforcement, Walker is finally retiring his badge and gun.  In November 2014, he will retire from government and serve as a Security Consultant for the Chick-fil-A Corporation.

“People often reflect on those small moments in time where their lives completely change for some unexplained reason.  Mine was on the campus of Radford University after graduating with a master’s degree when a friend of mine yelled to me across the quad about a job posting at the U.S. Department of Labor, OIG.  I was getting ready to accept a job as a police officer, but something told me that I should walk to the career placement center and apply.  Now, 25 years later, here I am,” says Walker.

Walker strongly encourages students to get involved.  “If you come to Radford to just get a degree and you were not involved in anything, who will be your references?  If you don’t get involved and take advantage of all of the opportunities the university has to offer, you are doing yourself a huge disservice.  College is so much more then getting a degree,” he says.