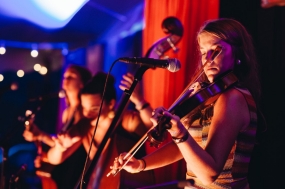 Rachel Blankenship-Tucker '09, an RU theater graduate, is a member of the high-energy Appalachian band After Jack -- a female trio with a unique twist on traditional mountain music.

Blankenship-Tucker started playing Appalachian music when she was five years old.  "I had a few years of experience under my belt before I came to RU.  However, coming to Radford and collaborating with other Appalachian musicians, really helped to inspire me," says Blankenship-Tucker.  The band found each other at a professional theatre company where they realized they were a melting-pot of three unique musical perspectives.

"Most people do not realize how much theater is involved with being a musician.  Performing on stage takes high energy and lots of endurance. We also develop a 'character' for our stage presence.  The theatre department at Radford, really taught me all of those things and so much more," says Blankenship-Tucker.

After Jack's new CD will be released on April 22. The band will be performing on Radford's campus April 18 starting at 8 p.m. in Pridemore Playhouse, Porterfield Hall.  After Jack will also locally be performing at Acoustic Uprising, in Wytheville, Va. and Dogtown Roadhouse & The Sun Music Hall in Floyd, Va.