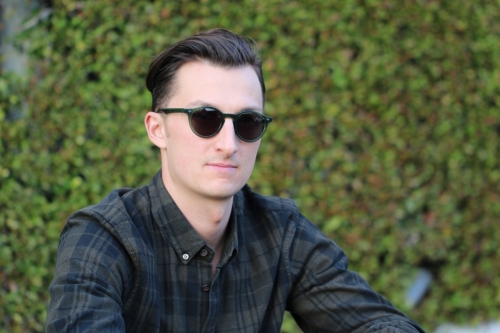 “Radford University gave me a sense of community, the tight knit atmosphere and the constant support from one another made my experience unforgettable,” says Phil Martin ‘08, owner of J. Martasand, a sunglasses company located in Los Angeles, California.

Martin grew up in Buena Vista, Virginia, a small town of only 7,000 people. “The size of Radford University’s campus is what drew me in as I knew I would feel comfortable and could excel,” Martin explains.

Martin came to Radford University as sports nutrition major, with the goal of becoming a basketball coach at the collegiate level. After taking an introductory course, he quickly realized that the thought of working in coaching was much better than the reality. Martin then decided to change to a double major in business administration and marketing and management.

“Although I can take away something from each professor at Radford University, my most memorable professor was Dr. Rodrigo J. Hernandez. With his authentic and approachable personality, he glamourized formulas and financial calcuations. He helped set me up for success,” says Martin.

Radford allowed Martin to get to know his classmates, professors, neighbors as well as his brothers of the Alpha Sigma Phi fraternity on a personal level. Such interpersonal skills do not always come easily.

“With Radford University being such a close community, I was able to strengthen my people skills, which has helped me succeed in any environment," Martin explains.

Martin graduated from Radford University in 2008. “It was the prime of the Great Recession, the market was limited, businesses were laying off and finding a profession took some time,” Martin says.

Upon graduation he moved to Washington, D.C., where he was hired as an analyst at a small consulting boutique. He worked with the company for about a year before receiving an offer from a larger firm, Deloitte, to work as a consultant. After two-and-a-half years at Deloitte Martin was offered a position at PricewaterhouseCoopers (PwC), where he worked for four years, moving up to senior associate.

“I found myself succeeding within the consulting arena; however each passing year felt less fulfilling than the year prior,” Martin explains. “Until I had a candid conversation with myself was I able to come to the realization of my entrepreneurial aspirations. So for the greater part of two years I began strategizing and building J. Martasand while working full time at PwC.

“As of mid-January 2016 I resigned from PwC to focus on growing J. Martasand’s brand and serve as a champion of those in pursuit of the ‘American Dream.’”

Operating out of Los Angeles, Martin designs each frame as well as tackling all tasks associated with operating a small business.

“All of our products are made exclusively here in the United States by micro-manufactures as we aim to impact as many small communities across the country as possible,” Martin states.

To this day Martin still collaborates with his Radford University peers. A Radford alumnus who owns a retail store in Frederick, Maryland, carries his collection. Martin also collaborates and shares knowledge with another designer located in Los Angeles, who is also a Radford alumna.

Martin advises students not to measure themselves against others, but instead to “stay true to yourself by pinpointing what success is to you, specifically, and go for it.”