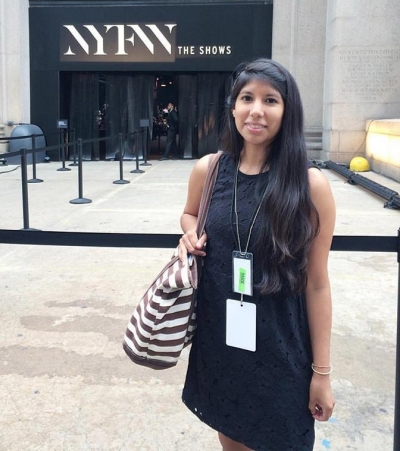 For many, Thanksgiving starts with a 9 a.m. viewing of the Macy’s Thanksgiving Day Parade. But for Patricia Gainer ’14, a Department of Design alumna, her Thanksgiving began at 2:30 a.m.

Gainer worked as a dresser at this year’s parade. While others were sleeping, she dressed in black (this is required of all parade crew) and collected her pocketed styling kit, which she wore around her waist. In the pockets were pins, clasps, clamps, double-sided tape, small scissors, a headscarf (to protect costumes from makeup) and sewing essentials.

At 4:45 a.m. she arrived at the Grand Ballroom of the New Yorker Hotel. This was the dressing area for the costumed parade participants, who are known as marchers. After checking-in, she and one other dresser were assigned a costume rack.

“I was in charge of the holiday clowns. My clowns wore a whole bodysuit, a little hat, blue wig, collars, gloves, spats, and ribbon, and were supplied with confetti,” Gainer said.

Gainer familiarized herself with the costumes on her wardrobe rack. A picture was located on the head of the rack and displayed how the costume was supposed to look, along with accessories. Also included was information about what each marcher was to wear.

“As a dresser you will hand everything to the person and they will either go and get dressed on their own or rely on you for help,” she said. “Each person is different. If no help is needed by one marcher you just look around to see if anyone else nearby is struggling or you prepare for the next person.”

By 8 a.m. the marchers were dressed and bused to the parade starting point. At 9 a.m. the parade officially began and was broadcast live throughout the country. All the dressers, hair stylists and makeup artists were served breakfast and gathered to watch the parade on screens.

Gainer’s mother, Kim Gainer, a professor of English at Radford University, joined her daughter for breakfast as they watched the parade together. She was allowed to go behind-the-scenes after the dressers prepared for the return of their marchers.

“I sat in a large room with marchers who had turned in their costumes and were enjoying complimentary pastries and beverages,” she said. “I learned that they were all Macy’s employees, that they were volunteers, and that some of them were from out of state and had ridden on charter buses throughout the night and would be turning around and traveling straight back.”

Bins were set up for laundry and disposables, and there were return racks for all the other items.

“As the marchers came in, everyone pitched in to help them undress,” Gainer said. “The cooperation made the process go faster as we all worked as a giant team.”

Teamwork is something Gainer came to understand during her time as a Radford University design management major with minors in marketing, management and entrepreneurship. Her marketing and management classes stressed teamwork and projects.

“While group projects could be tiresome and a bit aggravating at times, they definitely helped out in the end,” she said. “You work as a team member a lot in the working world, whether it be in the office, on the sales floor or backstage. I think I’m good at working in wardrobe and as an assistant stylist because of my school team projects.”

Part of being professional during the parade meant Gainer had to make sure all the marchers turned in their entire costumes, which took about three hours. As a dresser, she was not permitted to leave until everyone else checked out and the cleanup process was complete.

But these types of long workdays are what make Gainer a success as a professional dresser. When she first started working in New York City, she performed a lot of volunteer work before receiving paid jobs. To have a steady paycheck, she works at Anthropologie, a retail store which provides her with a flexible work schedule and allows her to participate in jobs like the parade and New York City Fashion Week.

Gainer participated in her first Fashion Week this year. She said it was very different from the parade work. Marchers are all volunteers. The models for Fashion Week are professionals who are working for a living. For the latter group, they rely on the dressers.

“They normally don’t put on the clothes themselves, simply because you as a dresser know how the clothes go and can move at a fast pace,” she said. “Backstage is fast and the energy is high. You can’t be hesitant or lazy.”

Similar to the parade, a photo card is attached to the wardrobe rack, which shows the dresser how the clothes are supposed to look and what accessories go with each design. The card also tells the dresser the order of the clothes to be modeled.

For Gainer, who also has movie and television credits to her name, the hard work is worth it.

“It’s very rewarding in the end and you really get to experience things that are once in a lifetime,” she recalls. “Riding home in a van with Jesse Eisenberg, seeing Tim Gunn, Nina Garcia, the cast of Dance Moms, and Christina Ricci is something I’m never going to forget. Flashing my [New York City Fashion Week] badge at the door and being let in immediately is just a dream come true. Going to a wrap party after you’ve finished working on a film is an incredible feeling.”

The wrap party for the Macy’s Thanksgiving Day Parade was a more personal type of event for Gainer. She finished her duties at 1 p.m. and she and her mother took a train to New Jersey for their family Thanksgiving. Her day ended with a return trip to the city as the next morning her workday started at 7 a.m. – just in time for Black Friday.