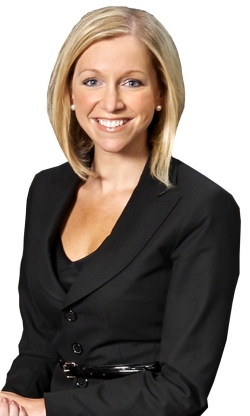 Nicole Robinson '02 credits advice from one of her favorite Radford University communications professors Dr. David Dobkins, now retired, for helping her to become the youngest vice president in the history of SES Government Solutions, a defense contractor and global satellite company.

She was also recently promoted as one of five Corporate Vice Presidents on the company’s Executive Leadership Team.

"Dr. David Dobkins gave me the best piece of practical advice, which is a quite simple, yet incredibly impactful common expression -- 80% of life is showing up.  In order to apply yourself and be in a position to grow and advance, you have to put yourself out there, raise your hand, and take on new challenges.  To this day that serves as a basic guiding principle that continues to have influence in my life," says Robinson.

Robinson's unexpected path in government contracting stemmed from an internship while attending RU.  "At the time, the U.S. Army Center of Military History was looking for a communications and public relations candidate that would garner support from the army to build the National Museum of the U.S. Army," says Robinson.  A small business defense contractor selected her for the job, in which she had the honor of interacting with a vast array of active duty and retired Army men and women. She ultimately developed a heightened appreciation for their service and commitment.

Robinson remembers an experience during the 60th Anniversary of D-Day commemorative events in Normandy, France, where she listened to the testimonies of some of our nation’s oldest Army veterans.  “Listening to their stories while standing in the very place they served gave me a tremendous sense of appreciation for all that they’ve done, and all that they’ve given.  While I’ve never worn the uniform myself, at this point in my career I developed a passion for contributing to their great cause and supporting our men and women of the Armed forces," says Robinson.

After 12 years in the Defense industry, Robinson serves as the Corporate Vice President of Communications and Government Affairs for SES Government Solutions.  Being a young female in the industry, Robinson has been inspired by a number of women who have blazed a trail for others to follow, and who have pushed the proverbial glass ceiling in fields that had predominantly been led by men.

In addition to the Women in National Defense group, Robinson admires Marissa Mayer whom was named Fortune’s No. 1 “40 Under 40.” Mayer's rapid climb to Vice President at Google, appointment as CEO of Yahoo at the age of 37, and her appointment to the chief executive position while nearly six months pregnant impressed Robinson.  “Marissa is an inspiring woman and an impressive example of a talented young professional with drive – eager to challenge the traditional paradigm while managing balance in building her family.”


Robinson recalls the words of Dr. Dobkins once again when asked to offer advice to current Radford University students.  She encourages students to challenge themselves.  "Reach outside of your comfort zone.  Take on new challenges and responsibilities and don’t limit yourself to only one perspective or tradition.  Your ideas and contributions are as unique as you are – so show up, bring them forward and put yourself out there.  You just might surprise yourself," says Robinson.