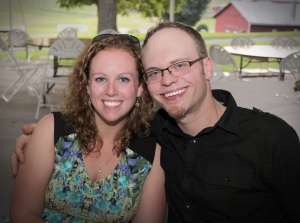 Currently they work and reside in Charlotte, North Carolina. Nicholas Stewart is an instructor and studio manager at Braitman Studio. His students range from age 14 to 100. Kate Stewart is the program director/lead teacher at the Holt School of Fine Art. She teaches students between the ages of 6-16.

For these two artists, who also spend their summers teaching a summer camp program they developed at the Holt School of Fine Art, their Radford University success story is not one about art alone, but romance as well.

Meeting during a painting class taught by Halide Salam, professor of art, an unlikely event brought them together – criticism.

“The first time I met Nick, he sat in on a critique in Dr. Salam's class,” Kate Stewart said. “He was extremely critical of my painting and I was flattered he had taken such an interest in it, so I approached him at the end of class, and asked if we could do it again sometime.”

“As I grow as an individual, my work continues to grow with me,” he said about the changes in his work since his time as a student. “I work more in mixed media now instead of a pure painted surface. The illusion and physical breaks of the surface are my subject priority, followed close by paint and application.”

Though his subject matter has remained the same, he has introduced brighter colors to his palette. Stewart acknowledges friend and mentor Andy Braitman, the studio owner where he works, influence with this modification.

For Kate Stewart, her educational payoffs from the university include technique, art history, and the ability to prepare work for an exhibition, and then actually show it.

Unlike her spouse, she continues to use a similar bold color, oil-based palette though her work has changed in other ways.

“I have always been fond of making small subjects very large, including during my time at Radford,” she said. “I have developed an abstract process that construes and mimics the patterns of invertebrates on a large scale.”

The difference in her current work is that her new abstract process involves lots of texture, whereas her past work featured smooth surfaces.

The “Beyond the Tartan” exhibition is the second dual show for the couple. They exhibited together in May 2015 at Holt McLean Studios in Charlotte.