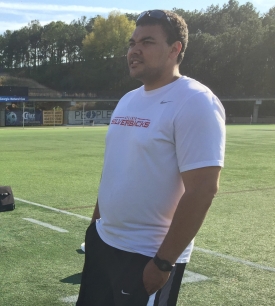 “Volunteer when you can because it may not seem like it is beneficial for you at the time, but the connections you build will really help you in life. If you have the opportunity to volunteer take a risk and do it. Pay it forward,” said Nathan Charlton ’09

Today, Charlton is the Director of Operations for the Atlanta Silverbacks. He coordinates the team’s pre-season and season travel and game schedules. This can be difficult at times since the Silverbacks rent time for games and schedule around other organizations using the same facility. Charlton is also in charge of writing player’s contracts.

As a Radford native, Radford University has always been a part of Charlton’s life.  After a year at Concord University to play football, Charlton transferred to Radford to major in sports administration. Radford helped Charlton find his passion in the “behind the scenes” of sports.

Charlton took advantage of opportunities as a Radford student.  He was a founding father of Pi Kappa Phi fraternity, and a referee for intramural sports. Along with being involved in extracurricular activities, Charlton had a strong work ethic. During his freshman year, he worked at a local pharmacy while volunteering as an assistant coach with the local Dalton Intermediate School’s 8th grade football team. During his sophomore and junior year he worked at Food Lion to help pay his college tuition, and in his senior year he interned with Radford University’s Director of Athletic Compliance Robbie Davis. “When I started my internship, I realized that I wanted to be behind the scenes.  Dr. Davis helped me find my interest in the administration side of sports.”

Following graduation, Charlton moved to Atlanta with his brother. He soon realized that he wanted to further his education in sports administration and applied for graduate school at Georgia State. With no job or no school acceptance yet, he volunteered with the football team at Georgia State to keep him busy. While waiting for an opportunity, Charlton kept positive.  He said “there was no question I was getting into that school and the program.”  With perseverance, Charlton was soon accepted into Georgia State and successfully completed his graduate degree in sports administration.

All of his hard work and experience led to his current position with the Atlanta Silverbacks. He says that interning with Davis at Radford and volunteering to coach the eighth grade football team, and putting in the time with Georgia State football made a difference in the future opportunities open to him. “Enjoy your time at Radford, it goes by fast. Some of the best times of my life were when I was an undergraduate student at Radford University. However, if I could go back in time to change something, I would have started interning a lot sooner,” said Charlton.