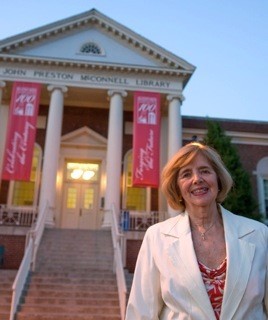 “I learned how to be a leader at Radford,” says Nancy Finch ’60 who, after a career in journalism and public relations that spanned five decades, now serves on a division of Gov. Terry McAuliffe’s Task Force on Prescription Drug and Heroin Abuse.

When Finch first began her education at the then-named Women’s Division of Virginia Polytechnic Institute, she studied home economics, a common degree program for women at the time. But it soon became apparent – to her, at least – that she was not on the right path.

“Nearly everyone got married shortly after graduation,” Finch explains. “I realized I didn’t like that idea too much.

“At that time, there was also a lot of pressure [for me] to become a teacher,” she continues. “But I felt sure that I did not want to be a teacher.”

Prior to beginning her freshman year, Finch got a job working for the local newspaper, the Radford News Journal. Her enjoyment of that job combined with the fact that she was enjoying her English classes much more than home economics, convinced Finch to follow her passion for writing. After her freshman year she changed her major to English and never looked back.

“It’s very important to get internships in a field you are interested in,” Finch says. “Those internships mean a lot when it’s time to get a job.”

While she completed her degree at Radford, Finch served as the editor of the student newspaper, Grapurchat, and continued her work with the Radford News Journal. After graduation, Finch attempted to get a job with the Roanoke World News, but was “scared to death by an old editor” there. With that experience she left the world of journalism, becoming a “not very good social worker” for less than a year.

Eventually Finch would try her hand at journalism again, landing at the Waynesboro News Virginian before moving on to the Charlottesville Daily Progress and ultimately the Richmond Times-Dispatch.

“When you start, work for a small newspaper, where you cover everything,” Finch advises. “Don’t go with a larger newspaper where you end up covering just one type of thing.”

It was at the Times-Dispatch that Finch’s year of home economics came in handy – she was eventually named as the newspaper’s food editor.

“They thought I knew something about food because of my year in home economics,” Finch says with a laugh. “They were wrong.” But she did enjoy cooking, and – now with small children – she was able to write her columns from home.

Finch’s work in journalism eventually led her to a career in public relations, working as an information director for the Virginia Community College System. Later, she joined The Public Relations Council and served in governmental relations at the Virginia General Assembly for George Mason University, Mary Washington University, Virginia Retired Teachers Association and Virginians for High Speed Rail.

“I first had the pleasure of working with Nancy on a women’s health initiative in Richmond a number of years ago,” said President Penelope W. Kyle. “Nancy epitomizes leadership and service. Her dedication to the Commonwealth throughout her entire career has immeasurably made a positive difference in the lives of so many. She exemplifies the selfless qualities of so many Radford alumni throughout the history of our school."

Finch’s experience in Richmond inspired her to take a stab at politics, running for the House of Delegates in 1995.

“Unfortunately I didn’t win,” Finch says. “But I am very proud of the campaign we ran.”

While public office was not in the cards, public service very much was. After losing her son to a drug overdose in 1994, Finch became active in the fight against the scourge of substance abuse in the Commonwealth. She served on the Regional Drug Free Alliance as well as the Substance Abuse Committee during her two terms on the Chesterfield County Community Services Board.

“We worked closely with the DEA, drug courts, etc.,” Finch says. “I was on the board for many years and led many efforts through state and local agencies in education, treatment, regarding issues of substance abuse. I lobbied at the General Assembly on behalf of legislation involving drug treatment.”

Finch was eventually appointed by Gov. Mark Warner to the Criminal Justice Services Board. Her work, while commendable, has not been without its frustrations.

“We work so hard on legislation, but it is even harder to get money for the legislation once it is passed,” Finch explains.

Her work in Richmond culminated in Finch being named by Gov. McAuliffe to serve on the newly-formed Governor’s Task Force on Prescription Drug and Heroin Abuse. According to Gov. McAuliffe, this task force will address the “growing and dangerous epidemic of prescription opioid and heroin abuse in the Commonwealth.”

While Finch is hopeful about the impact the task force may have, she realizes there are many hurdles to overcome.

“The fear is whether or not something like [the task force] can survive another administration,” she says, highlighting the difficulty of working in an ever-changing political landscape.

Though you wouldn’t know it by looking at her schedule, Finch is technically retired. However, she does find time for her passion – writing.

“I wrote a great letter to the editor today,” Finch says.

“My family groans – and probably many others as well – when they see yet another letter or op-ed from me. My husband says, ‘You don’t have to comment on everything!’ ”

But commenting on, and becoming involved in, subjects of interest is exactly what a leader does. And Finch credits at least some of that ability to her time at Radford University.

“I’m glad I went [to Radford University],” Finch says. “It offered me an opportunity for leadership that I’m not sure was available at a coed institution at the time.”