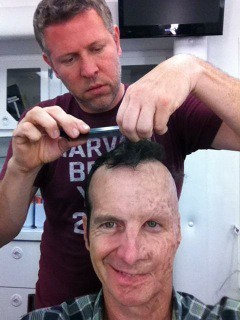 If you like what you do, so it's said, success will follow. This has certainly been the case for Monte Haught '91.

Haught came to RU intending to major in biology, but he switched to theatre during his freshman year. When he was cast in Radford's children's theatre production of "Punch and Judy," his career was launched.

Haught credits RU's Department of Theatre & Cinema with giving him a well-rounded education in his field. When he graduated, he realized he would need to specialize in one particular area of theatre. He decided on hair. The rest is styling history.

A native of Richmond, Haught returned  to his hometown after college and acted with a children's theatre company. Realizing he wanted something more, he moved to Washington, D.C., and enrolled at Graham Webb International Academy of Hair in Arlington. While there, he started working at the regional theatre Arena Stage for well-known wig designer Jon Aitchison.

"I was also lucky enough to have worked at the Kennedy Center on two national tours of' 'Miss Saigon' and 'Beauty and the Beast.'  I then moved to New York City in 1996 to start working on Broadway as a hair and wig stylist. I worked on the original production of 'The Lion King' as the assistant hair supervisor soon after getting to New York."

During eight years in New York, Haught was a stylist for Broadway productions including "Phantom of the Opera," "On The Town" and "Beauty and the Beast."

In 2004, he moved to Los Angeles and began working in television and film. His first job was on police-procedure drama CSI: New York.

Reflecting on his Radford University experience, Haught said his greatest influence was Professor Monica Weinzapfel, who encouraged him to try every aspect of theatre, including costumes, props, acting, box office and stage construction. Haught worked as a student intern in the costume shop, one of his favorite Radford experiences. By the time he was ready to graduate, he had the basic skills to find his niche.

"In both theatre and television, you find yourself working on long-running show and projects, and finding a way to make each day and season fun, creative and challenging." He enjoys knowing he has helped actors "get into their characters each day with my hairstyling and creations I bring to them."

What does one do after receiving the highest award in his field? Keep working, and keep working hard. Haught said he wants to find new ways to challenge himself artistically, adding humorously, "and not get bored." He hopes to find assignments that "I can really dig my teeth into and create something I have never done before."

The next time you're watching a TV show or a movie, take a good look at the hairstyles. When the credits roll, look for Haught's name. You never know which celebrity might be wearing Haught hair.