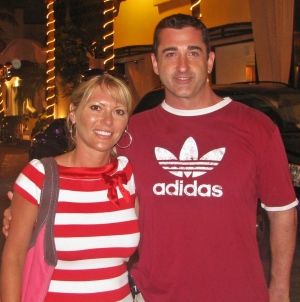 “My biggest take away from Radford was the relationships.  Everyone will get the degree which is important, but, what you do with the relationships you make as a student—that is what matters,” says Mike Dolinger ‘91.

As a student, Dolinger played on the soccer team and was involved in Greek Life.

“Both of these experiences taught me many valuable lessons.  On the soccer team I was able to find my internal motivation and learn to always strive to do my best.  In the fraternity, I was on the leadership board.  This taught me how to work with many different and unique personalities,” says Dolinger.

After graduation, Dolinger and one of his fraternity brothers, Todd Foley ‘91, decided to take a risk and purchased an Exxon Mobil franchise.  “We were 24 years old and the youngest in Maryland to operate their own franchise.  We both had a tremendous amount of fear, but together we purchased the gas station and ran the business successfully,” says Dolinger.

As the two were learning and growing in the business world, they decided they wanted to explore a different business.  Together the two purchased a coffee franchise.  “It was a small mom and pop type shop, but we wanted something that fit our personalities better than the gas station.  We ran both franchises successfully for seven years until we decided it was time to sell,” says Dolinger.

Once Dolinger and Foley decided to sell their business, they parted ways to follow their individual goals.  Dolinger started attending culinary school at night and began a job for Glory Days Grill.  “I started entry level with Glory Days.  I wanted to go out and own my own restaurant, but I knew I didn’t know enough about the industry to do that yet.  I quickly moved up the ladder and became its director of training,” says Dolinger.  After six years with Glory Days, Dolinger’s mentor asked him to be his Vice President of Operations at Caribou Coffee.  “I went from managing about 20 restaurants to being in charge of 70 coffee houses,” says Dolinger.

Today, Dolinger is the Director of Operations for the Clover Restaurant Group.  “I have been familiar with the brand for a long time.  It was a wonderful thing to get back into the culinary world, especially with a company that had just transitioned into new management,” says Dolinger.  The Clover Restaurant Group was founded in 2007.  It is a family owned and operated company that has developed a reputation for both quick-service and full service restaurants in and around the DC area.  The Clover Restaurant Group is the parent restaurant to four different brands.  “The brands that we run are Cafe Deluxe, Tortilla Coast, Tynan Coffee and Tea, and U Street Cafe,” says Dolinger.

Dolinger is responsible for the oversight of all operations, including the culinary development of the concept.  He helps to develop and design menu items and works with his executive chefs and operations team from ideation to implementation.  “You are constantly looking at your resources.  You go to trade shows, food competitions and even the local culinary school to gather ideas.  We rely on constant communication with our chefs, because they come in everyday with new ideas,” says Dolinger.

When Dolinger was asked what made the food industry so attractive to him, he said it’s the perfect synergy between people and business.  “Here it is all about the interactions that I have.  I get to deal with the creative side of my brain and the business side,” says Dolinger.

Dolinger encourages students to take advantage of their relationships and networks that they develop while in school.  “Each of the businesses I have been involved in, have been very unique and special in their own way.  But, out of all of them the coolest one was having my business with my fraternity brother, Todd Foley.  Together we learned so much about leadership and the business world.  We took the friendship we developed at Radford and turned it into a successful career,” says Dolinger.