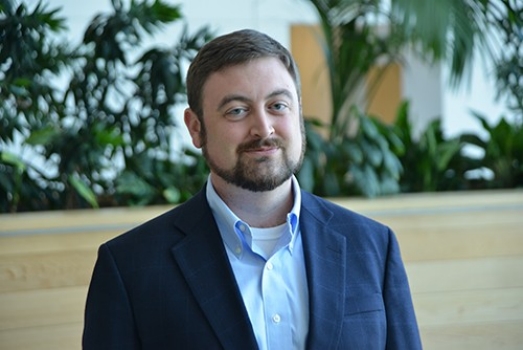 “My cousin went to Radford University and called to tell me about the school when I was about to send off my deposit check to another university,” explains Matthew Crisp ’04. “I went online and was impressed by their web page – it was the early days of the internet, after all – and decided at that moment to mail my deposit check to Radford University despite having never set foot on the campus.

“It was probably the best decision of my life.”

Crisp is the co-founder, president and CEO of Benson Hill Biosystems, a St. Louis-based agriculture technology company. Benson Hill’s mission is to unlock the global genetic potential of plants in order to enhance the sustainability of food, feed, fiber and fuel production via the combination of plant biology, big data analytics and cloud computing.

“Basically, I work at the intersection of technology and agriculture,” Crisp says.

“We need to produce more food using the same resources that we use now – perhaps even less,” he continues. “Over the next 30 years, we are going to need to be able to double the output of crops on the same amount of land that we use today.”

Crisp continues, “We and our partners harness natural and novel genetic variation of plants through breeding, trait development and genome editing to develop products that accelerate crop improvement.”

Crisp, the 2016 recipient of the Radford University Young Alumnus Merit Award, did not originally set out to change the world one seedling at a time. Rather, he began his career as a venture capitalist, working with numerous life science and technology companies at Third Security, LLC. His work with Third Security opened the door for him to become the founding president of the Agricultural Biotechnology Division at Intrexon Corporation, a leading synthetic biology company.

“It was while working with Intrexon that I became passionate about using technology in agriculture,” Crisp explains. “That is why I later decided to start Benson Hill.”

Forming a company from whole cloth was nothing new for Crisp, who did exactly that when, as a student in 2002, he helped found the Student Managed Investment Portfolio Organization (SMIPO).

“When we formed SMIPO, we pitched it to the RU Foundation’s Board of Directors, wrote by-laws, went to conferences,” Crisp says. “We wanted it run as a business would run, rather than as just another assignment for credit.

“I remember reviewing student applications while sitting in Cook Hall,” Crisp continues. “We held interviews like any other business. We had a day-one boot camp, of sorts, to weed out those that did not want to be there. After the first day, about three-quarters of the original group returned and we were off-and-running.”

Fifteen years later, SMIPO is still providing College of Business and Economics students an opportunity to gain practical experience in the management and decision-making processes of a corporate structured organization by participating in the hands-on management of the funds. Its portfolio is currently worth over $1 million, and it earned the top fund ranking for the Value Fund Category – Undergraduate Division at the 2016 Global Asset Management Education Forum.

“It was easily one of my favorite experiences in life,” Crisp says about the founding of SMIPO. “We created an environment where students felt rewarded by their work. We created something from nothing.”

Crisp says that much of the confidence that he needed to begin a business, such as Benson Hill Biosystems, or a school organization, such as SMIPO, came from his time at Radford University.

“I have a lot of affection for Radford University. I owe it a lot.”