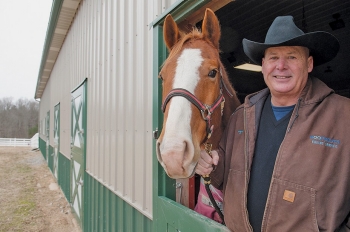 Securing Success as a Pioneer and Entrepreneur in Web security

For someone whose work for nearly 30 years has been with “the most paranoid people in the world,” Matt Donlon ’82 is open and outgoing.

Donlon, who graduated with a double major in criminal justice and political science, and his colleagues and clients in the security industry are charged with protecting valuable data and sensitive information. They must be vigilant for sure and paranoid occasionally.

Through most of his working life, he has been a guardian of his organization’s sensitive information. Experience in the dynamic fields of security and computers, he said, combined nicely with his experience at Radford to prepare him for a risky but successful venture in the private sector.

Donlon co-founded the Extranet Secure Portals (ESP) Group in 2000 that developed and marketed an application service provider secure enough to be trusted and widely used by the security community and elsewhere. ESP Group was sold in 2006 to NC4, an international solution provider that collects, manages and shares information to mitigate risks, manage incidents and securely communicate and collaborate.

To Donlon, ESP Group’s successful development and marketing effort highlight two values for which he developed an appreciation during his undergraduate days.

“Recognizing the value of good relationships and the willingness to take risks were two of the biggest lessons I took from my time at Radford,” he said.

Shortly after graduation and in his first “real” job, Donlon was asked to develop some security plans for the company’s new building. The task was not part of his job description at the time, but he took a risk, embraced the challenge and put together a document that caught someone’s attention. Shortly thereafter, he got a call and was asked if he was interested in working for the government. An application, an interview and off he went to the West Coast to supervise the security of a top-secret project.

“All of a sudden I was doing something important. They showed faith in me and gave me the chance to sink or swim,” he said.

Swim he did, to a distinguished career.

He was director of the Security and Intelligence Office at DARPA and served as the security officer for the Office of Aeronautics and Space Technology at NASA. As a program security officer, he supported DARPA’s classified research and development programs for the Navy. Throughout his extensive and exciting career, he has received awards for his innovations and contributions to the security profession. He has been awarded the Meritorious Civilian Service Medal and the Exceptional Service Medal from the Department of Defense. Donlon is a visiting scientist at SEI-CMU, a center that works with defense, government, industry and academic institutions to improve software systems.

As DARPA’s director of Security and Intelligence Office, he was challenged to make the Internet both secure and collaborative. In response, he assembled and guided a team that within a year created the thoughtware and processes that led to ESP Group’s popular Internet collaboration portal service. That successful development effort forced a gut-wrenching career choice and set him on an entrepreneurial path.

He said: “Working at DARPA was my dream job, and they gave me the opportunity to see what I could do to leverage the Internet in a secure way to share information. It became a success. They gave me a choice—stay and continue my 14-year career with the government or go and see what I could do with it in the market. It was a tough decision. My dad, a career government official, thought I was crazy to even consider quitting and, by the way, my wife was expecting our second child.”

He took the risk. In January 2000, ESP Group was launched to serve a diverse governmental and corporate client list: the departments of Energy, Justice and Homeland Security, NASA, Department of Defense, the National Counterterrorism Center, the Office of Personnel Management, as well as pharmaceutical and clinical trial companies. Six years later, NC4 acquired it. While Donlon remains with NC4 as a consultant, he is now actively pursuing other business interests.

For Donlon, that means a busy schedule. He remains affiliated with NC4 and its ongoing effort to secure the systems that store the world’s data and facilitate collaboration. He is expanding his taste for risk-taking with a pair of non-technology and non-security businesses—the Portrait House restaurant in Richmond and Hoofbeats Equine Services in Jetersville.

Hoofbeats was recently the setting for a pilot of a reality television show based on a European version called “Marry My Farmer’s Daughter.” They are now awaiting a decision about going into production.

Donlon is reconnecting with his alma mater and the Radford campus community. “I came back for a couple of homecomings and a 30th year reunion event,” he said. “It was an opportunity to see people I hadn’t seen in a long time and enjoy the campus.”  He also enjoys being a member of the College of Humanities and Behavioral Sciences Advisory Board to share advice and expertise with his alma mater.