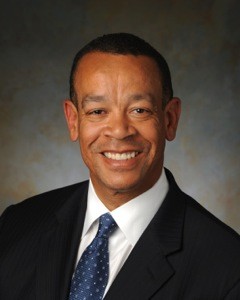 Marquett Smith ’85 is driven by his mission to maximize his potential. “I grew up in the ghetto of Washington, D.C.  I’m fortunate to be where I am today,” he says.  He is currently the president of the Washington/Baltimore/Virginia region for Verizon Wireless.  He holds full profit and loss and operational responsibility for a $2.8 billion revenue stream for the nation’s largest wireless company.  He’s a two-time winner of Verizon Wireless’ President’s Cabinet Award for sales excellence and the prestigious Verizon Chairman’s Award for outstanding business leadership.  “I look back on things that I have accomplished, but I’m not done yet.  I don’t hang up plaques.  I’ll put them up when I’m done,” he says.

While at Radford, he was the chapter president of the NAACP and one of four male cheerleaders for the Highlanders.  He also worked part-time at the local bike shop.  He chose Radford University for its size and its academic reputation.  “It felt right,” he says.  Smith, who was a marketing major, received financial assistance through grants and loans -- and his parents helped when they could.  “A lot of people helped me along the way.  My professors challenged me and helped me learn how to study harder and figure out my own path.” Even now when he has an important presentation to make, he reaches back to the skills he learned in college while creating his class assignments.

“The foundation of knowing how to prepare came from college.  I was willing to study longer.  We all learn at different speeds.  If you have to put in a little more work or are more diligent early on, that doesn’t mean you won’t be successful,” says Smith.  “If I don’t give it all that I have, we may not reach or exceed our $2.8 billion dollar revenue goal. I’m not putting a cap on myself – that is my core discipline.”

He figured out that if he didn’t limit himself and strived to reach his best possible, so much is possible. “It is a privilege to go to college.  Some don’t have the ability or opportunity.  I was determined to make the most of it,” he says. Once he graduated, he didn’t limit himself by setting a goal of a dream title, salary or position.  “When I graduated, I didn’t have this job in mind.  I was just determined to make the most of all of the opportunities in front of me.”

In 1985, Smith began his career at Sprint. Five years later, he was recruited by American Online (AOL) to lead the expansion from one to five customer support centers.  While at AOL, he worked with fellow alumna Eileen Bramlet '82, MS '84, who served as Senior Vice President. “People who worked at AOL did it because of the love of the work and creating new technology.  We truly believed in it,” says Smith.

By 2002, after completing the Executive Management Program at MIT and holding positions at Cybercash and Interliant, he began his executive career at Verizon Wireless.  Smith moved up through the Verizon ranks with titles of director of customer service, director of retail stores, executive vice president of customer service, president of the upstate New York region, chief communications officer, vice president for Verizon Enterprise Services, and then to his current position of region president. “When it got tough, I could have given up along the way. But I pulled myself up by my boot straps and kept going.”

Smith says it’s important to balance work life, community engagement and family life. “Sometimes you need to measure your success by those you help along the way.  Not your personal success, but how many lives you have positively impacted along the way,” says Smith.  In addition to sitting on the boards of Big Brothers Big Sisters and the Redskins Foundation, Smith has committed $50,000 to endow The Cassidy Achievement Resources and Equality Fund (C.A.R.E.) at Radford University.  The purpose of the fund is to assist students from diverse ethnic backgrounds at Radford University who experience an immediate personal need for funds to continue their college education.

“It’s important to me that we all take action and help others. Some donations are bigger and some are smaller. What they have in common is that we give back,” he says. Smith invites others to donate to this fund to help give an extra financial boost to hard-working students who need it. “Any level of giving will help a student.  No amount is too little because it’s more than they had before you decided to give.”

Smith says RU alumni can make a difference for future and current RU students.  A Radford education is possible for all those who seize the opportunities in front of them.  “We are here to show students that there are many ways to reach success. They can earn that valuable degree and achieve their best possible.  We are here to encourage, support them and model the way.”