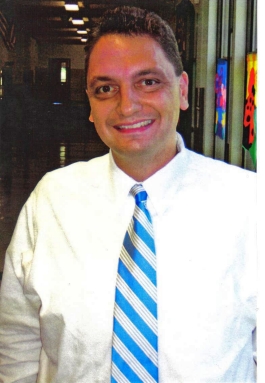 The word ardent comes to mind when speaking about Mark Argenziano ’90.  He is a basketball enthusiast whose passion guides him on and off the court.

Argenziano is currently an English as a Second Language (ESL) Middle School teacher in Lawrence, Massachusetts.  He is also Director of Scouting for the United States Basketball League (USBL) and previously held the same position with the Continental Basketball Association (CBA).

When Argenziano was in high school, his family moved to Guadalajara, Jalisco, Mexico.  While there, Argenziano continued his devotion to the game of basketball.

“In order to avoid getting into trouble, I continuously practiced basketball.  As a result, I perfected my shooting.  To this day, even after all my injuries, I still have my shot,” says Argenziano.

While Argenziano was in high school at the American School Foundation of Guadalajara, staff from Radford University would travel to the campus to supervise a Student Teaching program.  As a sophomore in high school, Charles Wood, former Assistant to the President of Radford, saw Argenziano playing and recommended him to former RU basketball coach Joe Davis.

“Radford invited me to come to their summer basketball camp in 1984.  I suffered a serious injury after my sophomore year but they still had interest in me.  While I was there, I developed strong relationships with the coaching staff,” says Argenziano.

After his junior year, Argenizano was invited to Five Star basketball camp, which featured some of the top players in the nation.  “I had suffered another serious injury and was instructed to take about six months off.  With the fear of losing my opportunity to be seen, I played through the injury.  Unfortunately, I did permanent damage to my back, and I was unable to continue my playing career in college,” says Argenziano.

Even though his playing career was over, Argenziano made a name for himself at American School Foundation of Guadalajara.  Upon graduation in 1986, he held the male record for most career points, three-pointers in a game, and the highest free-throw percentage in school history.  With these skills and record-breaking techniques, Argenziano decided to attend to Radford University.  He wasn’t able to play, but he did make a difference with the players on the team.

“Even though I could not physically play basketball at a high-level anymore, I was still able to teach my shooting skills to the players.  I would work with them for long hours in the gym helping them to perfect their shot.  That was the beginning of my player development career,” says Argenziano.

As a student, Argenziano majored in Spanish with a physical education minor.  After graduation, he moved to Massachusetts and began his current job as an ESL teacher.  “I work in a very poor area.  Often, the children that come through my class have very poor skills in general.  My job is always much more than teaching the English language, it’s about being a positive influence for my students,” says Argenziano.

After school, Argenziano runs basketball clinics to help high school players perfect their own skills and to stay out of trouble.  “While at Radford, I had the opportunity to help run the basketball camps.  With the skills I learned from Radford University’s basketball staff, I had the foundation and confidence that I needed to do what I love,” says Argenziano.

Not only does Argenziano run his own clinics, he has also consulted for various professional basketball teams.  In the past, he has served as a shooting coach, assistant coach and even head of scouting for numerous NBA development league teams.  Argenziano has also worked with Kevin Mackey, now a scout for the Indiana Pacers.  Mackey says that Argenziano is a “terrific shooting coach and an incredible basketball mind.”

Today, Argenziano is a consultant for a professional basketball team in Canada and profiles players in order to land them contracts.  Throughout his career, he has helped more than 100 players land jobs playing professional ball.  His player profiles have made an impact, and so has his shooting workout, the “Argenziano 500.” This technique has helped professional players to middle school players perfect their shooting skills.  The technique was also mentioned in a chapter of the book “Andy Roddick Beat Me with a Frying Pan,” by Todd Gallagher.

Argenziano is making a difference.  Whether it be in the classroom, on the basketball court or in the stands watching a game, he has taken the lessons and experience he gained from Radford University to help the dreams of many young people become a reality.