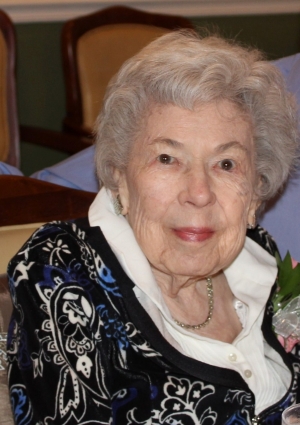 In 1934, Lucille Pettyjohn Stewart ’38 was 16 years of age when she was greeted at the Radford train station by Radford College students.  “I came on the train 110 miles from Bristol, Virginia.  It took me four hours because we stopped often.  No one was with me that I knew, and I had my best clothes on,” she remembers.

Mrs. Stewart is now 96 years old and still remembers the welcome she received.  “They were waiting to meet me and carry my baggage up the hill to campus.  I checked in at the administration building and learned of where I would be staying,” says Stewart.

She was familiar with Radford, since she visited the campus before and stayed a week with her sister Claribel Pettyjohn McCormick ’31 in Madame Russell, now known as Russell Hall.   While checking in at the administration building she discovered that she too would be staying in Madame Russell.  “It was a new dormitory when we were there.  It was very nice.”

She remembers her roommate, Anita Belle Cruise ’38, who was the youngest freshman at 13 years of age.  Upon graduation, Cruise earned her master’s degree at the University of Virginia in 1942 and then worked for the National Institute of Health as a microbiologist.

Stewart was involved in many clubs during her time at Radford including the Beehive, The Tartan, International Club and Phi Gamma Nu.  She was also involved in Student Council and ran for student president. “My good friend Anna Burnett (Elcan) ‘38 received more votes than I did, but that was okay.  I was really happy for her,” says Stewart.

Stewart had to help pay her own way during her last two years of college and was a student worker in the administration building, which was located where Muse Hall now stands.  She served as the receptionist and was responsible for ringing the college’s bell.  “Every hour I went up the steps to the ladies toilet.  I stood on top of it to pull down the cord to ring the bell to change classes,” she remembers.

Upon graduation, Stewart was hired by Radford High School.  “They asked me to teach that year and take $50 a month.  I took it and got an apartment in town with my classmates who were also hired.”  She taught at Radford High School for three years. She then married and received a job as a teacher in Washington County.  Later, she taught Latin and English in Bristol public schools until retiring at 58 – after a total of 25 years teaching.

Stewart says that teaching young minds comes with responsibility. “A teacher is supposed to set standards for students.  You have to be careful about what you say and what you do, because you’ll influence the students one way or the other,” advises Stewart.

She says that her time at Radford is very clear in her mind.  “Those were some of the best times of my life,” says Stewart.  Since graduation, she has visited campus and seen the growth and change from Radford College to Radford University.  “I enjoyed going to reunions, and my last one was my 50th,” says Stewart.  Now she lives in Florida and flips through her scrapbooks to remember her friends and the times she spent on campus.  When told of the growth and progress of the university, she is very proud of her alma mater. “I’m always glad to see progress.  The school is making real progress and I’m glad for them.”