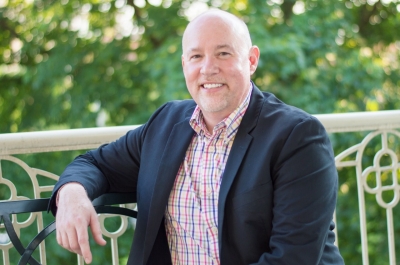 Lee Clark ’85 has a passion for facilitating others to come together to make a difference.

“Mr. Rogers said, ‘When I was a boy and I would see scary things in the news, my mother would say to me, ‘Look for the helpers. You will always find people who are helping.’ I have always been zealous about helping others and Radford University allowed me to embrace my passion and watch it grow,” says Clark.

As a student, Clark majored in business administration with a focus in accounting. He was involved in residential life and was a founding brother of the community service fraternity Alpha Phi Omega.

“Starting the first co-ed fraternity on campus was a lot of hard work,” says Clark. “We built the organization from the ground up and it makes me very proud to see it still flourishing today. When I was a student, Alpha Phi Omega worked with the Women’s Resource Center, which was a great influence.”

Once Clark graduated and started with Brown, Edwards & Company – a public accounting firm – he was prepared to interact with clients from all different backgrounds.

“I think that is one of the skills that Radford helped me to develop,” says Clark. “I am able to walk into any environment and work with all sorts of personalities.”

After about three years, Clark joined The Roanoke Times where he worked for 14 years.

“I really enjoyed working with them because they saw potential in me that I didn’t see in myself. I went from being a CPA to handling sales and dealing with major advertisers,” says Clark.

He went from being the major accounts executive at The Roanoke Times, to the director of development and administration at the Rescue Mission of Roanoke.

“I started volunteering with the Rescue Mission and became a member of its Foundation Board of Directors,” says Clark. Out of the blue, the executive director told me they were creating this new position and they wanted to hire me.”

After working for the Rescue Mission for 10 years, Clark moved to the American Red Cross.

“I am the regional chief operating officer for Virginia. My role is to communicate the mission of the American Red Cross and invite people to get involved with us,” says Clark.

When disaster strikes, Clark and his team are always waiting in the wings. Recently, they were prepared to help the Commonwealth of Virginia with potential flood damage from Hurricane Joaquin, but when the hurricane shifted direction, the team instead deployed their resources to South Carolina.

“I feel most energized when I am doing something that is making a difference and inviting others to come and help,” says Clark. “The days where we are making an impact on the lives of others are the best days!”

When asked about going from an accountant to leading a non-profit, Clark recognizes the risk of the move, but he also understands the benefit his previous experience provides.

“I never thought of it as a possibility to work at a nonprofit, but the volunteering I had done throughout the years really opened my eyes,” says Clark. “Having the accounting background proves to be very beneficial. I still keep my CPA license and there is this great synergy about looking at a financial document, understanding it and then being able to communicate it to others.”

Clark has received numerous awards honoring his work, including the Patriotic Employee award from the National Guard as well as the Compass award, which recognizes excellence in planning and execution within communication activities and programs.

“I am very proud of the Compass award, which came from the Roanoke chapter of the Public Relations Society of America,” says Clark. “They recognized the work that the American Red Cross did in Pulaski County in 2011 after the horrible tornadoes. It was very powerful to me that the public affairs professionals in our community acknowledged that we did a good job in communicating with the public during this tragic time.”

Due to Clark’s unique and winding professional path in his professional life, he encourages students to try new things and not feel limited just because they have a particular degree.

“My path wasn’t straight. Don’t get worried because your degree is in one thing, but your passion might be in another,” says Clark. “Radford helped me earn my accounting degree, and it also helped me to follow my calling for helping others – ultimately leading me to where I am today.”