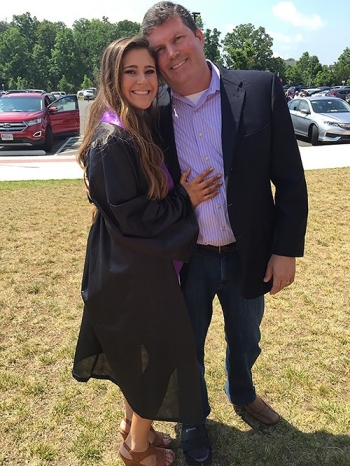 Kevin Rogers '87 with his daughter, Megan, who will be a first-year student at Radford University in the fall.

“My dad was very involved during his years at Radford University,” says first year student Megan Rogers. “He has told me stories about memorable times, such as when he was the school mascot, Rowdy Red, his experiences with his fraternity, as well as the quality of the professors.

“All of these aspects are what influenced me to attend Radford University.”

These aforementioned clients include businesses like Northrop Grumman, Mantech, financial institutions, government agencies including the Department of State and the Department of Defense, and universities such as Liberty, Maryland and, of course, Kevin’s alma mater.

“With Radford University, we continue to donate our software in order to help position Radford University as an award winning and nationally recognized leader in cyber security education. Kevin explains. “Radford University is the only East coast school to have placed in the top three universities at the yearly Mid Atlantic Cyber Defense Competition in four of the last five years, thanks to the terrific professors and staff at Radford.”

The Chantilly native did not originally have dreams of being a leader in the tech industry. In fact, Kevin’s journey to Radford University began with a much smaller – yet no less important – dream. “I went to college night at my high school,” Kevin says. “And I saw a poster of the then-Radford University mascot, Rowdy Red. I immediately realized that I wanted to be that mascot. I needed to be that mascot.

"I got a huge Rowdy Red poster that night and put it in front of my bed during my senior year in high school to motivate me towards my goal of being the school mascot. When I arrived at Radford for my first year, I met with Chuck Taylor, the athletic director, and told him ‘my dream is to be the mascot’. I got the job right on the spot.”

Being Rowdy Red, however appealing, was not the only factor in his attending Radford University. “The communications program also brought me in and, more importantly, my connection with my guidance counselor and mentor Ted McKosky helped paved my career path for who I am today,” Kevin adds.

Originally enrolled as a communications major with a concentration in radio and television production, the communications program would ultimately introduce Kevin to the field that would become his career. “Additionally, I took my first computer class – BASIC coding – at Radford University,” Rogers says. “The culture on campus allowed me the ability to be a ‘tinkerer’ and discover many subjects and refine my skills and abilities.”

Kevin remained a communications major, but changed his concentration to business and math. “Radford University built my self-esteem to the point that I was able to take a leap of faith,” he explains.  “That’s not something I would’ve been able to do at a larger school.”

The culture that allowed Kevin to find his eventual career still exists on the Radford University campus, which was attractive to Megan. “The university has an abundance of opportunities, which makes the decision of declaring a major difficult,” she explains. “I am interested in several areas of study, including interior design, nursing and elementary education. I have thought about becoming a pediatric nurse because it combines a number of these subjects.”

Kevin explains that he introduced Megan to Radford University at a young age. “I brought her to the campus several times, and she really liked the smaller, social aspect of the campus,” he says.

“I love how friendly and welcoming the atmosphere of the campus is. Also, the new student recreation and wellness center caught my eye, and, as a whole, the campus is breathtaking,” Megan adds.

Kevin, who serves as the president of the Radford University Alumni Association Board, challenges "every alum that has not been to Radford in the last five years to plan a trip to visit the University and experience what the school has become and what it has achieved. If you do that, I can guarantee you will walk away with a huge sense of pride as an alum and feel proud to tell others the reason you chose Radford University."

He continues by saying, “I suggest you bring your children early in their high school years. The students here get to experience immersive hands-on programs that students of other schools don’t get to touch until a master’s program at the earliest.

“They receive real world experience at Radford University. These are the reasons we hire Radford grads to help grow our company and why I am proud that my daughter Megan is following in my footsteps.”