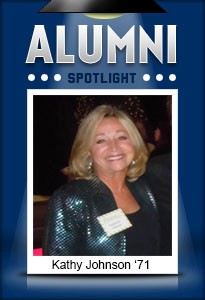 The proverbial "glass ceiling" was no obstacle for Kathy Johnson '71.

She has blasted through it by holding numerous high-ranking government positions with the United States government.  Fresh out of college, Johnson worked as an Intelligence Research Specialist for the United States Secret Service, in Washington D.C., for nine years.  "This job really is a good way for students to get their foot in the door in law enforcement," says Johnson.  Johnson applied multiple times to become an agent, but was constantly told that women were still not being hired due to lack of "qualifications."  She didn't give up.  "If you can't get in through the front door, go in through the back," says Johnson.

Finally, Johnson was offered a special agent position with the General Services Administration, Office of Inspector General, and moved to New York City.  Three years later she transferred to the Department of Defense, Defense Criminal Investigation Service (DCIS), as a special agent and was later promoted to Resident Agent in Charge of the New Jersey office.  She was responsible for the development, evaluation and training of staff personnel, annual budgets, office space and government vehicles.  In 1993, Johnson was transferred to DCIS Headquarters as the Product Substitution and Health Care Fraud Director to oversee field investigations and develop policy and guidelines for field personnel.

Just before Johnson retired in 2001, she held the position of Director of Health Care Fraud for the U.S. Postal Service, Office of Inspector General.  Here, Johnson developed and implemented a nationwide health care fraud program to identify medical practitioner fraud within the Workers' Compensation Program, resulting in significant cost savings.

Johnson says she always felt that she had to work harder than men to prove her worth.  "I got a lot of 'Honey this', or 'Blondie that', 'Can't have blonde hair, be pretty, and smart.'  There was always an underlying message that women were not good enough," says Johnson. Throughout Johnson's years of serving, she earned the respect she deserved.  "I have a motto I go by, 'I may not always be first, but I will never be last'."

Currently, Johnson is self-employed as a government contractor and conducts background security investigations for the U.S. Department of State, involving criminal checks, credit checks, and personal interviews of applicants, co-workers, and potential presidential appointees.  "I'm doing this for fun.  In the 32 years I have spent in criminal law enforcement, 'out in the field' was where I had the best time," says Johnson.

Johnson encourages women to pursue a criminal justice profession.  “Life goes by too fast.  If you have a career that you enjoy getting up in the morning for, then you never have to work a day in your life.  Be tenacious, be passionate.  You will succeed."

“Radford was a life-changing experience for me that I did not realize at the time.  I am truly grateful for the education afforded to me through grants, work scholarships and student loans.  I could not have achieved what I did in my career without that degree.”