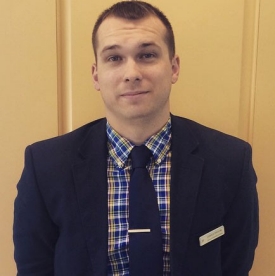 Joshua Taylor ’13 is the Marketing and Sponsorship Sales Manager at The Greenbrier Resort – marketing and selling sponsorships for the resorts major sporting events.  The recreation, parks and tourism graduate says that he is passionate about promoting the resort and his hometown.

“I grew up in this area, so selling this place is like second nature to me.  There has been so much history on our grounds; it is hard not to get excited about it.  Just recently, the New Orleans Saints built a training facility for their summer training camp here.  We have so much going on, so much growth here; it makes The Greenbrier the ideal place to be.  I care passionately about this resort and the surrounding area,” says Taylor.

He says the classes at Radford University prepared him to be successful. “I wouldn’t be where I am today if it wasn’t for the education that I received at Radford.  One of the most influential classes I took prepared us in every way possible for life after graduation.  We conducted mock interviews and worked on our portfolios to prepare us professionally,” says Taylor.

The class “Recreation Workshop” also gave him the opportunity to explore his interests in special events. “The biggest event we did was a ‘Battle of the Bands’ fundraiser to raise money for an individual in Roanoke..  We were responsible for everything.  We weren’t given any money, so we had to come up with the resources ourselves.  At the end of the battle, we ended up raising almost $3,000,” says Taylor.

Upon graduation, Taylor became a Festivals and Event intern for the Charleston County Park and Recreation Commission in Charleston, South Carolina.  “The interview process was competitive. But after my first interview, they told me I was one of the best interviewees they had ever had.  I credit Radford for that.  Being someone who grew up around the mountains, having an internship at the beach for a summer was awesome.  I learned a lot and the experience led to my current job,” says Taylor.

Before Taylor found his niche at The Greenbrier, he completed the resort’s Manager in Training program.  “During the year-and-a-half program, I had the opportunity to spend a month or so within each department in order to find my niche.  The point of the program is to place people where they will be happy and love coming into work,” says Taylor.

When thinking about advice that he would give students, Taylor says that they should take all of their classes, especially their major classes, seriously. “Often in college, I would find myself thinking ‘where will I ever use this boring, time consuming risk management plan?’  Just a couple of weeks ago my boss asked me to do a quantitative analysis on a company that we were going to pursue for sponsorship possibilities.  At Radford, my hardest in-major class was a research class.  The hardest project was to complete a quantitative analysis.  If I didn’t take that class or received the help from my professor, I would have been lost and not have been able to help my company.  The classes you take in your major are specifically designed to prepare you for a job in your desired field.  Remember that,” says Taylor.