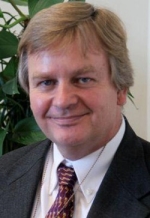 The water that sustains life and the electricity that sustains a modern lifestyle are often taken for granted in developed nations. Yet in John Smith-Sreen's world, no one takes them for granted. Smith-Sreen works for the U.S. Agency for International Development (USAID) overseeing projects such as helping to maintain a clean water supply in Jordan and providing electricity to parts of Afghanistan.

Now a resident of Sarasota, Fla., Smith-Sreen grew up in Alexandria but also lived in Belgium and Laos, where his parents were in the U.S. Foreign Service, a component of the Department of State. At Radford University, he majored in biology and minored in English, receiving a Bachelor of Science degree in 1981.

Smith-Sreen's career with USAID is an example of how RU alumni are making a difference globally.

Question: When did you decide you wanted to work for USAID?

Answer: I was sitting in a music class at Radford and saw on the bulletin board a tear-off card about jobs with the Peace Corps. I had an affinity for living and traveling overseas because of my parents' careers, and my love for the outdoors and adventure was honed at Radford. During my senior year, I applied to the Peace Corps and went to Cameroon as a fisheries volunteer. We helped rural farm families grow fish for extra food and income. I loved the life and loved the work. During that time I interacted with a lot of folks from both the State Department and USAID. After Peace Corps, I went to graduate school at Michigan State and received a master's degree in natural resources management. I worked for a few years with various non-government organizations. I applied to the Peace Corps again but this time as a staff person, and I spent the next eight years in Gabon and Washington, D.C. During the final year in D.C., I applied to both USAID and the State Department, and received offers from both. I decided to go with USAID. That was in 2000. USAID hired me as an environment officer.

Q: How often do you have to move with your job, and in what countries have you lived?

A: I have stayed a minimum of one year in Afghanistan and a maximum of five years in India. Generally, tours last two to four years in a country. This work has carried me from the U.S. to Cameroon, India, Gabon, Jordan, Afghanistan, Sri Lanka and Kenya. Cameroon and Gabon were with the Peace Corps, and the other countries have been USAID postings.

Q: When you were assigned to Afghanistan, what were your thoughts on the project? Did it seem overwhelming?

A: I was picked up at the airport in Kabul, given a bullet-proof jacket and stuffed into an armored vehicle with four others. The wind was howling across the plain, dust was swirling through the streets, and I was in a bit of shock. I arrived at my "hooch," a reconditioned shipping crate that formed my living quarters, and then at my office, which was shipping crates stuck together. I went to work six days a week for 12 hours each day. There were many plans, but they all needed to be revised, so I worked very hard from the moment I arrived until the moment I got back in the armored vehicle that took me back to Kabul airport a year later. I took five breaks during the year to see my family. Tough times, but when I look back on it, I'm glad I did it.

Q: You served as the executive officer in charge of administration for USAID in Sri Lanka. You left there in January 2012. From there, where did you go?

A: I currently work in Kenya managing the democracy, rights and governance (DRG) portfolio. The DRG portfolio has 15 projects valued at about $74 million covering elections preparation, constitutional reform and conflict mitigation. A new constitution was adopted in 2010, and Kenya will host its first general election under the new constitution in March 2013, so our portfolio is extremely active at this time.

Q: How have you seen the benefits of your work?

A: In Kenya, our investments have helped strengthen the current electoral commission that will administer next March's elections, have supported Parliament in crafting more than 30 new laws under the 2010 constitution and have funded hundreds of small-scale community development projects like water distribution systems, carpentry shops, bridges, social centers and the like that are designed to build community cohesion and foster social and economic growth.

Q: What has been your most challenging project?

A: The Kajaki hydroelectric dam that I worked on in Afghanistan during 2009-2010. This was arguably the single most important investment USAID made in Afghanistan. Kajaki is located in the volatile Sangin Valley in Helmand Province. It provides about half the electricity for the city of Kandahar and a significant amount to neighboring Lashkagar. It also provides water for irrigation throughout southern Afghanistan and even potable water for some of the villages in the Sangin. We had built the dam back in the 1950s and installed two turbines in the 1970s. Our job was to refurbish the two old turbines, to install a third turbine and to significantly upgrade the transmission lines leading from Kajaki down to population centers in the south.

Q: What are your thoughts on the work that USAID does in helping other countries have a better quality of life?

A: USAID is a wonderful organization and is doing very important work all over the world that truly improves social and economic conditions for people. This is important for the United States in that helping people is the right thing for our country to be doing, but also it helps build alliances and credibility for the U.S. throughout the world. In many countries where USAID operates, we are one of the more significant bilateral donors, so we have good access to host country counterparts and good convening power when we want to bring people together around a common cause.

Q: What are some of the challenges you've faced in your career?

A: Physical danger, disease, long hours, complex technical and administrative challenges, and multiple, competing deadlines that can create a lot of stress. All well worth it.

Q: What is your favorite part of the job?

A: Seeing a smile on the face of someone who has benefited from your efforts.

Q: How has your Radford degree helped you in your career?

A: My major in biology prompted me to apply as a fisheries volunteer with the Peace Corps, which led to graduate school in natural resources management and eventually to my recruitment with USAID as an environment officer. My minor in English helped hone my writing skills, which are useful in any career.

Q: Who was your biggest influence at Radford University?

A: I think my biggest influence at Radford was (former) Coach John Harves, who taught me and believed in me as a soccer player and as a person.

Q: What is one thing you'd like RU students and alumni to know about your work and how the Radford experience can affect the world?

A: International development work helps make the world a better place for today's inhabitants and future generations. By working together, we make the world a better place for our children and children's children. This is good for the nations with whom we work and for the U.S. The degree I earned at Radford helped set me on a path to contribute, but that is just part of it. The camaraderie, discipline, teamwork, strategic vision, planning, time management and communication skills that I developed at Radford have all contributed to my career as a foreign service officer.