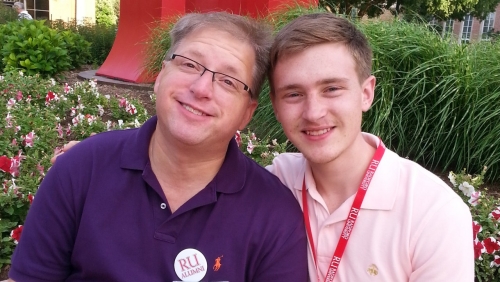 “It doesn’t matter what year you graduate, what major you decide to pursue or what it is you get involved in, the experience that students have at Radford University is life changing,” said John King ’91, MBA ’93.

Like so many Radford University students, King was a first generation college student ready to make a difference. He earned his bachelor’s degree in business management in 1991, then earned his master’s in business administration in 1993.

“I struggled my freshman year. It was definitely a wake-up call for me. Once sophomore year came around, I started trying to find a spot where I could plug myself in on campus,” said King.

King became involved with student government and residential life. These experiences had a huge impact on the remainder of his time at Radford.

“I think the residential life program is very unique. I never lived off campus. I spent three years in Muse Hall then my senior year was spent in Moffet and Draper Hall,” said King.

He served as a residential assistant (RA), and was a resident director (RD) for part of his senior year and while he was earning his graduate degree.

“I lived as an RD with my wife. She worked as a nurse while I was still going to school,” said King. “Even though she didn’t graduate from Radford, she says that when we come back to campus, it is like coming home.”

“Ever since I was a young child, I loved being able to come to Radford with my father to see the campus and spend time here,” said Zachary King. “During my college search, I didn’t know if I was going to come here. However, when I was a kid I had always wanted to follow in my father’s footsteps. In my time here at Radford University, I have been in fact following in my father’s footsteps.”

Just like his father, Zachary King is extremely involved.

“I have always told my son it is his responsibility to get involved. Your time at school is what you make it. College is an opportunity not only to learn academically but to learn who you are and what you want to be,” said King.

Today, King is the general manager for the Virginia Poultry Growers Cooperative (VPGC). VPGC was incorporated in 2004 and is now one of the largest organic and antibiotic-free meat producers in the United States.

“I have worked for many food and agricultural companies in the past such as Cargill and Pilgrim’s Pride,” said King. “Radford taught me to be someone that looked for opportunities. People can open the door for you, but you have to be willing to walk through that door on your own.”

King explained that his experience in residential life helped him become a successful professional today.

“I still use the communication, rational thinking and coping skills that I learned. I even use the negotiating skills I gained through working in residential life in my everyday business life,” said King.

Today, King has returned to campus a few times to speak with the business fraternity, Delta Sigma Pi. He told the students that where they start may not be where they end up.

“The only people that can sell you short is yourself,” said King. “I have said so many times that I would put my education up against anyone and not all of that comes from the classroom. It comes from getting involved and having some outside-of-the-class experience.”

The King family is passionate and proud of their past and present experiences with Radford University.

“You truly would be hard-pressed to find someone who is more passionate about this school than my father,” said Zachary King. “He always talks about college being what you make it and Radford University is the best example of that. The education and experiences you gain at Radford are second to none, and I cannot imagine going to college anywhere else.”

“I would put my education up against anyone’s,” reiterated King. “Radford is a gem and it is the place that I am proud to call my alma mater.”