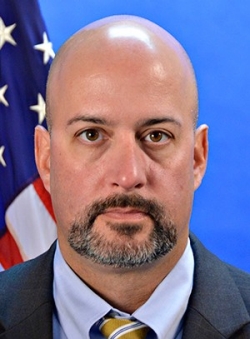 Going on 20 years as an FBI agent, Jim Harrison ’91, M.A. ‘92 has served the Bureau in numerous roles while being stationed in places like St. Louis, Budapest and Baghdad. He never planned for it to be that way.

Harrison enlisted in the Navy while he was at Radford University before graduating with a criminal justice degree. Not long after, he joined the Air Force Security Police, where he obtained the rank of major.

After five years in the Air Force, Harrison earned an appointment to serve as a Special Agent in the FBI, despite never having any previous desire to join. “I just wanted to try something different. It was kind of by accident,” admits Harrison. His jobs since then have included SWAT Team Leader, tactical and firearms instructor to the Baghdad Police College, and various intelligence positions.

His love for criminal justice was shaped while attending Radford University.

“I was inspired to serve in this field by solid professors, including Dr. Jack Call, who is still at Radford University,” said Harrison. “They helped guide me down this path.”

His decision to attend Radford University was an easy one.

“When I first visited Radford University, everybody there was extremely friendly and welcoming. It’s a beautiful location with a great campus,” remembered Harrison. “I knew early on that’s where I wanted to attend.”

Harrison made lasting connections as a Highlander, even getting the chance to serve with fellow Radford University graduates all over the world, and fondly recalls his experience while he obtained his undergraduate degree.

“It was fantastic. Everything from the dorm I lived in, to the facilities, to the classes and professors, to the friends that I still stay in touch with, everything there was fantastic,” raved Harrison. “In fact, I met my wife of almost 24 years [Amy ‘91] at Radford.”

“Find something that you enjoy and stick to it,” advises Harrison. “There are always going to be obstacles thrown your way but with the solid foundation of education that I feel I got out of Radford University, I was able to chart my own course, overcome any obstacles and have myself a pretty successful career.”

And for those currently studying criminal justice, Harrison recommends students remain flexible in their career prospects.

“Be open. I talk to young people all the time who want to join one particular agency or one particular police department, but I would say keep an open mind. Take every opportunity you have to grow yourself personally and professionally. Be willing to consider many different options within our career field.”

Today, Harrison is firmly planted in Augusta, Georgia, and has taken on a leadership role within the FBI, serving as a supervisory senior resident agent. While it’s not as flashy as his previous work, it still holds a lot of responsibility. Harrison has grown comfortable in his current role, and having lived in Augusta for close to seven years, he and his family are content to stay put.