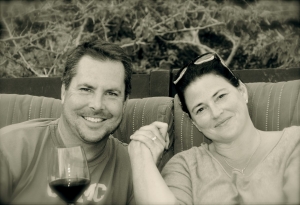 Jeff Graves '89 is the perfect example of someone who "seizes the day," by accepting challenges and failures as they come.  "I still like to say I have to figure out what I want to do when I grow up," says Graves.  Graves who served in the United States Marine Corps as an Officer after graduating Radford University, has started eight companies, lives on his seven acre vineyard and horse property, and currently works for Hodges-Mace Benefits Group as a Principal.

"Deciding to come to Radford was one of the three best decisions I've made in my lifetime," says Graves.  He majored in marketing, ran cross country, played lacrosse for our then Division I program, and joined the fraternity Sigma Phi Epsilon.  "The fraternity mainly consisted of lacrosse players and other jocks.  The time I spent with my brothers led me to my next adventure, joining the Marine Corps," says Graves. Over a six year period, 22 fraternity brothers, all alumni from Radford, joined the Marines. "That was the second best decision I have ever made," says Graves.  “The large number of Marines from this group is startling for a fraternity which had no ROTC affiliation. We all just followed one another year after year. In the first Gulf War, we figured our fraternity brothers literally led thousands of Marines in combat.”

After the Marines, Graves started his first business.  "I like to say that in starting a company, you are either going to fail, potentially provide an income for your family, and or, possibly hit it big."  Graves has been involved in starting numerous companies, such as Benefit Communications, California Legal Plan, Taylor Guard, iBenefits, Entegra, Tandem Benefits, Jumping Vines, and recently The Swanner House Winery.  "I am very stubborn. In some ways it is good and in some ways it is bad.  You have to take chances and eventually, you will hit the ball if you see enough pitches and get to the plate," says Graves.

Jeff and his family now own a seven acre vineyard and horse property in Orange County, California.  "My wife and daughters love horses and wanted a barn. We bought the property, but were told we could not have a barn unless we cleaned the slopes."  Graves learned that a vineyard was an ideal option because it is a fire resistant plant.  "I met a wine maker who said 'you don't want to do this. There is no money in it, and it's a lot of work.'  We ended up planting 1,600 vines and now have our own vineyard and wine label ‘Jumping Vines,’” says Graves.  He makes about 1,000 bottles of wine a year.  "There are three varietals -- Cabernet Sauvignon, Cabernet Franc, and Malbec. We take those and blend them together to give our wine attributes of all three. It just tastes better," says Graves.  A bottle of "Jumping Vines" wine is about $60 and is sold only at the Swanner House in San Juan Capistrano, a city in Orange County. Uniquely, Graves and his family do everything by hand.  "I can't fix my car, but I've learned how to tend the vines and make wine the old fashioned way," says Graves.

The third and final best decision Graves ever made was finding a spouse who puts up with all of this risk. "It's not easy risking time and money every couple of years, and it does take its toll. My wife Mishel is just as involved in my failures and the few successes I've been fortunate to achieve. It's a roller coaster ride. Financial success isn't worth anything without your family. Having both is the trick, and my wife has the ability to always remind me that there are four other individuals on this ride."

Graves encourages students to look for nontraditional paths.  "Think through what you want and don't be afraid if the opportunity approaches you sooner than you thought.  Take some risks.  It isn't a problem if you don't know exactly what you want to do.  It is important to still have fun,” says Graves.  Recently, former Sigma Phi Epsilon alumni are working with the university to recolonize their fraternity.  They will come back to campus to celebrate their organization that meant so much to them. “During my time at Radford, I developed some of the best friendships and relationships I've ever had," says Graves.