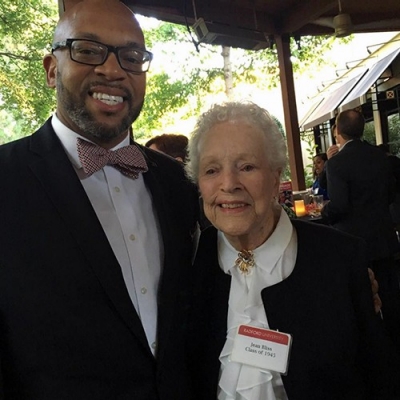 Big sister Ann, age 12, was doing her best to make certain her younger siblings, Jean and Charlotte, were presentable for their big scene. For a brief moment, they were the center of attention, being asked by a college president to stand from their front row seats at the 1935 Radford College graduation ceremony.

Up on the stage, with president Dr. John Preston McConnell, stood their mother and father, basking in their moment.

Marion Marshall Dennis and John Waldron Dennis were receiving their diplomas together, the first married couple to do in the then young history of the college.

“We were so proud of them,” said their daughter Jean Bliss ’45. “But, we were upset because Ann was giving us orders. But, that’s Ann; she’s the oldest.”

Seventy-two years removed from her own graduation from Radford College, Bliss beams with pride recalling stories of how her parents met, started a family and worked tirelessly to support their three girls.

She speaks radiantly about her mother, an elementary school teacher, who would “blow your mind” if you knew “all the things she did in education. She was outstanding in the state of Virginia.”

Bliss is reticent to speak much about herself, often switching the conversation back to her parents.

However, if you persist, she will tell you a little about her “wonderful roommate,” joining a sorority at Radford and her days swimming and working as a lifeguard.

She’ll make you smile as she giggles through a story about getting caught smoking Lucky Strikes – “everybody smoked cigarettes because it was a big thing then,” she said – and about getting busted by Dean of Students M’Ledge Moffett while sunbathing on a tin roof.

Bliss recalled another time Moffett caught her after going to her parents’ home in Salem for the weekend when she was forbidden to do – “Now, how do you think she even knew that I had gone?” she asked, still laughing.

Bliss earned a degree in elementary education at Radford and taught school for a couple of years.

“I didn’t do anything exciting,” she modestly said, and in a blink, zipped back to the 1930s, talking about her parents and their time together on campus.

It was 50 years before Radford become a co-ed institution, but in the summertime, a few men were allowed to take classes to further their education.

Early in their careers, Marion and John, who also was a teacher then, joined other educators at Radford for professional development courses. Both had two-year degrees from other institutions.

They had met a few years earlier when Marion journeyed almost 600 miles from her childhood home in Chincoteague to take a teaching position in Grundy. She took up residence with John’s mother in the small Buchannan County town.

John liked to tell a different story, Bliss recalled, claiming Marion noticed him one day in Chincoteague and chased him all the way back from the “flat” Eastern shore to mountains of Buchannan County. Bliss laughed recalling the story.

Either way, John and Marion later married, had Ann, Jean and Charlotte, and “realized they didn’t have enough education to support three girls,” Bliss said.

That’s when they decided to enroll together at Radford College for three summers.

“Daddy was all over that campus,” Bliss said. “He wore white knickers and he was cute as a button. I remember that well.”

While fortifying his education, John was always exploring ways to earn more money to support his wife and daughters. “He sat in the back of the class and sold protective insurance to all the teachers who were there,” Bliss said. “He was sort of an entrepreneur.”

In addition to teaching, John, who served in World War I and II, worked as a principal for a while. He was a banker, and he did other things on the side, like raising and selling goats and vegetables. “That’s Daddy!” Bliss said.

John also became an incredible builder. “He told us one day, ‘Girls, I’m going to build you a house.’ And he did. He had a knack for building,” Bliss said. “Mother and daddy were always looking out for us.”

At their Radford College commencement ceremony, each graduation candidate was called to walk on to the stage, receive their diploma from President McConnell and then exit stage left.

The drama built momentarily as John stood silent and still on stage.

Then, the president called for Marion.

“When they both got up there, Dr. McConnell began to tell the story of how they had come back to school for their education and for their three little girls,” Bliss said. “I was really proud of them. All my mother and daddy did was try to earn enough money support their children. That’s why they went to Radford.”