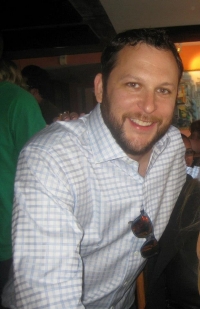 Jake Crocker ’99 is a successful entrepreneur and co-owner of five restaurants and a catering company.  In 2012, he was named one of the Greater Richmond area’s Top 3 Entrepreneurs by Richmond Magazine.  Crocker says when he enrolled as a freshman at Radford University almost 20 years ago, he did not imagine that he would become a restaurateur.  “I grew up as a meat and potatoes guy.  Prior to attending Radford, I hadn’t explored that many different types of food.  The first time I ate Chinese was at The Canton on Main Street, and the first time I can remember having Mexican food was at El Puerto right across the bridge in Fairlawn.  My college friends encouraged me to try new things,” says Crocker.

In addition to sampling different fare, Crocker found direction at RU.  “Radford took a directionless and shy kid and gave me a chance.  Radford gave me options to explore and find where I wanted to go.  The close-knit campus community, the centralized feel of campus, and the mix of housing created a very active and social atmosphere.”  As a freshman, he lived in Floyd Hall, which was the international residence hall, where he was exposed to people from all over the world.  “I had barely ever been out of the state!  This opportunity to get to know people from outside of Virginia and international students broadened my horizons.  It definitely helped me learn how to relate and interact with people who are different from me,” adds Crocker.

As an advertising major, he credits his instructor Bob Thomas with encouraging him to follow his interests.  He was ready to graduate from Radford and was looking pursue advertising.  “I asked Mr. Thomas which big city I should jump to.  He said Richmond was a hot city for advertising and told me about the Martin Agency, the top advertising agency in the country at that time.” Crocker idolized the the agency’s founder David N. Martin, who is the creator of the iconic “Virginia is for Lovers” advertising campaign and later served as RU’s spring 2010 commencement speaker.

Upon graduation Crocker landed an internship at Siddall, Matus & Coughter in Richmond, and then was hired at several different agencies as a media buyer, account manager and director of web development.  He launched his own web development company Intense Interactive “which started on the side and then it became a full-time job for a while.  It’s funny, I taught myself web development in the computer labs in Whitt Hall.”  Then in 2004, he was hired by Martin Branding Worldwide, Inc.  He later became a partner and it’s Director of Brand Marketing. He worked in partnership with the men whose work had inspired him when he was at Radford -- David N. Martin and his son David H. Martin. In 2007, he was recognized in Style Weekly’s Greater Richmond Top 40 Under 40. “I had been a leader in the advertising industry and we were growing our firm fast until late 2008 when the economy tanked.  That was not a good time.  At 30 years old, I was working with people that I idolized, and then the carpet got pulled out from under me.”

Crocker used his branding and marketing expertise to switch gears. “My background was developing, building and creating brands. I thought I’d use those skills for myself.”  He teamed up with a friend to open the first F.W. Sullivan’s in the Fan District of Richmond. “The year prior, I was sitting in board rooms discussing brand development with CEOs, and now to mopping floors at 4 a.m. while the professional world around me began writing me off as a has been.”  While he struggled to establish his roots as a restaurateur, he thought back on the plaque in Pocahontas Hall that he always admired as a student.  It reads, “Give the world the best you’ve got and the best will come back to you.”

“I haven’t seen that plaque in 15 years, but I can still quote it.  And I took that saying to heart. I’ve had success because that was always in the back of my head – immerse yourself and it will always work out.”

In the last four years, Crocker has reinvented himself and created the successful restaurants F.W. Sullivan’s Fan Bar & Grille in 2009, Lady N’awlins Cajun Café in 2011, F.W. Sullivan’s Old Town Bar & Grille (Fredericksburg) in 2011 through 2013, Uptown Market & Deli in 2012, Jorge’s Cantina in 2013, and preparing to open F.W. Sullivan’s Canal Bar & Grille, which will be a featured destination downtown on Richmond’s redeveloped Canal Walk. He also is co-owner of Overture Event Catering, the preferred caterer for Colonial Downs and The Virginia Derby.  His company has also catered to the Virginia General Assembly. “I’ve been very fortunate during the last three-and-a-half years, the four year anniversary of the business group is in November.  I’m hoping to dial it down a notch -- so I can enjoy it.”

He is still connected to Radford University and is very proud to be a Highlander.  “I’m very public.  I like to keep track of friends from Radford, and they are all successful, whether it’s in information technology, business, teaching or the medical fields.  At Sullivan’s, it’s like a Radford reunion all the time.  I’m starting to see the younger generations come in to the restaurant and introduce themselves as Radford graduates.” On September 12, he will host an alumni social Highlander Hour for all RU alumni in the Richmond area at F.W. Sullivan’s Canal Bar & Grille beginning at 5 p.m.  Highlander basketball coaches Mike McGuire and Mike Jones will also be there to talk about their upcoming seasons.

Crocker names several of his friends and fellow RU graduates who credit Radford and its campus community for giving them the skills, knowledge and direction they needed to succeed.  He says that current Radford students have the opportunities and support they need to figure out what they want to do with their lives.  “Radford helped me figure it out and find myself.”